WP TO TAKE OVER MORE GRCs TO DO COMPARATIVE STUDY 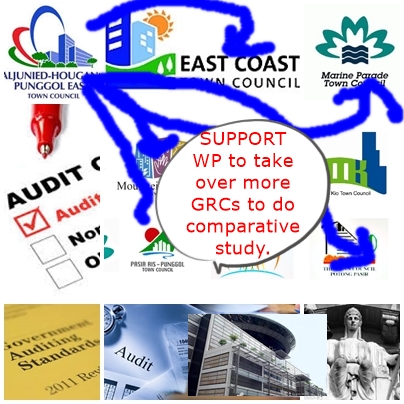 Too much have been discussed about AHPETC, and of course, the PAP thinks they can score points by continuing to do so.  However, we will never know the truth and real answer if there is a lack of comparative study.

To have a good comparison, Workers’ Party will have to take over more Group Representative Constituencies,.  (It is unlikely WP will lose Aljunied GRC), the more the better. WP can then check the audit standard, compliance and tenders procedures of say, East Coast and Marine Parade GRCs.

When taking over, to avoid making same mistakes like Aljunied GRC, a team of auditors and a legal team will have to stand by to make sure there is a proper transfer. The new town councils will then request the Auditor-General Office to do a 10-month audit on these town councils, using the same standard and procedures as they did in AHPETC.

Talk is so cheap for the PAP, especially they are in government. State machineries can be used to gain political points and create negative campaigning.

Let’s help WP to gain more GRCs so that we can compare the performance of different town councils.

Vote Oppositions - To See The Books You Want To See


If we really seriously want to see the books of CPF, GIC, Temasek Holdings etc. , then the last resort is to vote for the oppositions. The PAP will not show you the details, instead if you make a wrong calculation, you will end up receiving a letter of demand.


So, what can we do? The only way is to change the government. Only after changing the government, the PAP will have to hand over the books and the accounts to the new government. However, with 40% support, it is still a distance away for the Big change. Those who are seriously wanting to know the accounts and the books must work harder and ask more citizens to support the oppositions and vote out the PAP.


Voters, not politicians or the Courts, make the laws through parliament.  Laws must reflect the majority as politicians are only temporary elected to lead the country. The PAP cabinet can be removed if citizens vote them out.
(picture taken from Today, 24 May 2014)

So, the coming election slogan will be:


To see the CPF books, vote out the PAP.
or in short PAP out CPF in


In fact, not only we will see the CPF books, we will also see the HDB books whether there are subsidies or not, and also the medicare book, population book and many others.
Opening and closing balances


If the Aljunied Town Council is still under the management of the PAP, we will not know the problem of the opening and closing balances there. We certainly will not know the AIM problem. Below is the first item of the independent auditor's disclaimers in the Annual Report of the town council :


If these two balances are ‘unable to obtain sufficient, audit evidence and unable to determine’, the auditors will have to state it in the auditors' report as shown above.


But why do the closing and opening balances differ from each other? The auditors don't know and as outsiders, we also don't know. The only certainty is these two supposedly equal balances are now not equal. If the management of town council never changes hand, we will not know about this certainty.


In a media release on 14 February 2014, The Workers' Party explained the situation as follows:


[We do understand the auditors’ plight, as there were information gaps that existed at the handover after the General Election 2011 which to date are still not filled.  At FY 2011, the auditors had tried to request information from former auditors, unsuccessfully.  Repeated attempts by the Town Council (TC) to obtain information from the former Managing Agent (MA) and government authorities, such as asking MND / the Housing and Development Board regarding $1.12 million which the PAP-run Aljunied TC had recorded as receivables from the Citizens Consultative Committees (CCCs) for Town Improvement Projects, did not yield answers.  Attempts in FY 2012 to get the information were also unsuccessful.  Unless those agencies with the required information furnish them to the TC, it is likely that information gaps will remain and the accounts will continue to be qualified every year.  In this regard, we note that MND could well be the best party to assist the TC to resolve some of the key information gaps. ] #2

There is an information gap resulting to the opening balances problem.

Town council management is a small business as compared to CPF, GIC and Temasek. Will we expect more information gap when there is a change of government?


Hence, at least 3 scenarios may happen if we vote out the PAP.


2. The PAP is wrong.
There is information gap like the auditors' disclaimer in the Aljunied Town Council. In this case, an estimated opening balances have to open so that the accounting and (qualified with disclaimer) auditing work can carry out.


The new government may need to issue bonds or get loans from IMF, World Bank or Asian Development Bank if our cash balances are not sufficient to carry out the daily operations.  For the Aljunied Town Council case, there are money in the bank, so the daily operation is per normal and the town management needs not need to raise extra fund to support its operation.  Otherwise, Aljunied residents will have to pay more fees even though they have made no faults at all.


The certainty is we know there is an information gap. There is a ‘certain’ difference between opening and closing balances.


3. A delay of 52 man-years
This is the worst scenario and will create the biggest uncertainty in Singapore. We cannot rule out this possibility. When the late President Ong Teng Cheong asked to see the books, the answer from the PAP was:

[that the Accountant-General had informed him it would take 52 man-years to provide him with a list of the Government's physical assets;] #3

The account books need 52 man-year to calculate and new opening balances will then show up. What happen to CPF members, reserve, foreign exchange, etc in the mean time? This will create the biggest uncertainty in Singapore and will bring political crisis to the new government and Singaporeans. This potential political crisis is so different from the so-called political warning from government scholars and academics.


However, if we want to see the truth, the books of accounts, we have to vote out the PAP to see the real picture.  There is a price to pay for knowing the truth.