While China is transferring money to pension fund, our PAP wants to increase taxes.

The Ministry of Finance in China is to start transferring shares in State-Owned-Enterprises to pension fund for social security.  According to Caixin,

[A (China) Ministry of Finance document said that the move "demonstrates that state-owned companies are owned by all people and should benefit all people."]

China Daily adds that “the move will ensure the sustainable development of the country’s basic pension insurance system.” It can also improve the efficiency of SOEs. 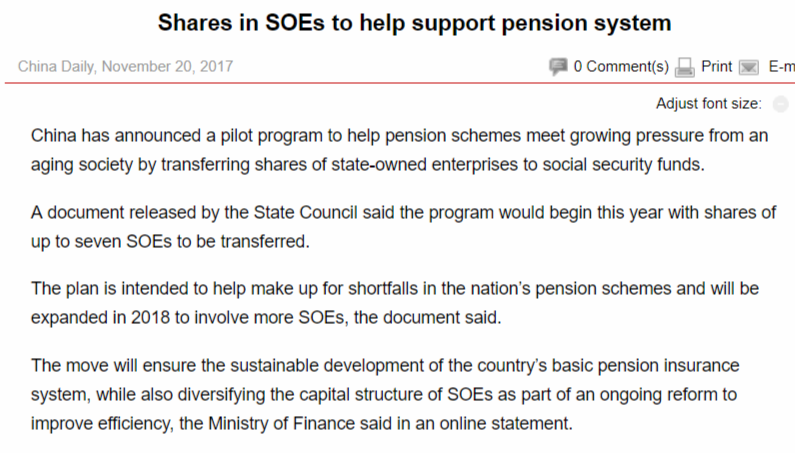 Currently, there are more than 200 million people aged above 60 in China. And there is a shortfall in pension fund, especially in poor provinces and bankrupted state companies..

[Taxes as solutions in Singapore]

While in Singapore, the People’s Action Party government is going to increase taxes. Here are some the headlines:

No contradiction between PM Lee and DPM Tharman on taxes: MOF

The PAP government says infrastructure investment and social spending are to increase, so do the taxes. Of course, they know how to divide social spending and Central Provident Fund which is the responsibility of individual members or family members. And so, the PAP is only helping citizens indirectly.

[Top up and transfer]

Many CPF members, especially senior citizens (they have low wages when the economy is booming), are not able to meet CPF minimum sum for retirement. Occasionally, the PAP will help to top up the MMS and Medisave.  However, most of time, they want family members to help to top-up CPF savings.

Indirectly, in case of need, mean testing is used to assess whether social welfare can be extended.

This means the country’s wealth is distributed according to PAP’s wish list.

While in China, the new policy will put money directly into the pension fund. This extra funding or top-up will provide additional money to pensioners.
(state-owned companies are owned by all people and should benefit all people.)

As a start, China will transfer un-listed SOE shares into pension fund. On average, the shares can generate 5% dividend which can then support the pension fund payouts.

This means if the PAP government is kind enough, some percentage of Temasek and GIC shares will go into CPF Board. These shares will generate dividends to support all, especially poor CPF members.

While we going doing the opposite. We are changing the phrase from:

(state-owned companies are owned by all people and should benefit all people.)

In an interesting and strange Financial Times report:

FT seems to suggest Temasek model is for efficiency rather than politics: Singapore’s Temasek holds stakes in domestic and foreign companies and is known for making decisions based purely on financial considerations.

While FT claims that “Use of holding companies, a model based on that of Singaporean wealth fund Temasek, had been seen as a middle way between the privatisation of SOEs and the current system, in which top managers are approved by the Communist party and often put politics ahead of commercial considerations.”

As a Singaporean, FT is either too kind to the PAP or does not fully understand the transparency and accountability issue surrounding Temasek, GIC and Singapore reserve.

If Temasek is efficient as FT claimed, then she should report all financial information in a transparent and accountable way.

While we may laughing at Chinese SOEs which are always politics first. However, when the government is transferring SOE shares to pension fund, it means all Chinese pensioners are watching the operations of their shares in related SOEs. These “hungry” Chinese senior citizens are very different from our CPF members.

Comparing to Singapore, CPF members have no say in the operation of Temasek, GIC and our reserve. Which is the better offer?
at November 27, 2017 1 comment: 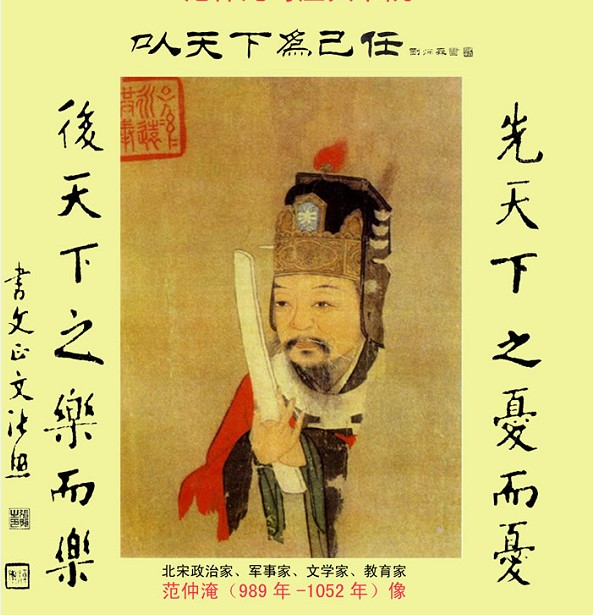 
Wong Kan Seng is to be Chairman of United Overseas Bank after being appointed as a Board Director.

It is a sad story. It is not meritocracy.

It is a sad story. It shows the limit of entrepreneurship in Singapore.

It is a sad story.  It is a political decision.

In his political career, Wong Kan Seng had no financial or commerce experience.

[A former member of the governing People's Action Party (PAP), Wong was a Member of Parliament (MP) representing the Bishan-Toa Payoh Group Representation Constituency. Wong served as the country's Deputy Prime Minister from 2005 to 2011. He also held the Cabinet portfolios of Minister for Community Development (1987–91), Minister for Foreign Affairs (1988–94), Minister for Home Affairs (1994–2010) and Co-ordinating Minister for National Security (2010–11).]
https://en.wikipedia.org/wiki/Wong_Kan_Seng

One can easily claim that being a minister one is qualified for all management jobs, including banking and finance, as he/she is looking after the ministry’s finance too. So a minister is like a chief executive of a corporation. And we should have no doubt about his ability to discharge his duty as a banker.

While meritocracy may not be applicable here, we can give the benefit of doubt to him. However, Wong is certainly not an entrepreneur before entering politics. His so-called business experience, after retiring from government, is only heading state-owned enterprises under Temasek.

UOB is an established bank in Singapore. Through merger and acquisitions, it has become one of the Big-Three here.  It is a private bank dating back to 1935.Whether we like or dislike the way UOB grows from a small bank to a big bank, it certainly represents some kind of entrepreneurship. It is able to make decisions on their own and making compromises along the way.

However, Wong is not known to obtain business acumen.

It is sad that a successful Singapore business still needs a non-businessman to guide its future. Does it mean UOB can only outgrow her present form with some political connections, even though Wong is an ‘old wine’?

It is a sad and bad example.

The only asset that Wong has is his position of former PAP Deputy Prime Minister.

Since 1935, UOB has always appointed a non-politician as Chairman. And UOB in many ways is a family controlled business. In one way, it is good to bring in new blood to reduce family colors. But it is also good to get external expertise to expand knowledge base.

Does it mean the inclusion of Wong indicating a shift where political connection is critical factor for future growth and expansion? Or Wong can be a stabilizer for lesser government’s intervention.

It seems to suggest political consideration is more important than entrepreneurship. And businessmen must know how to make use of their political assets.

UOB may gain something. Wong is certainly a winner. As UOB chairman, he will enjoy and be entitled to perks accorded to his position.

This is so different from Lee Hsien Loong’s statement on ministers’ pay in 2011/2012. 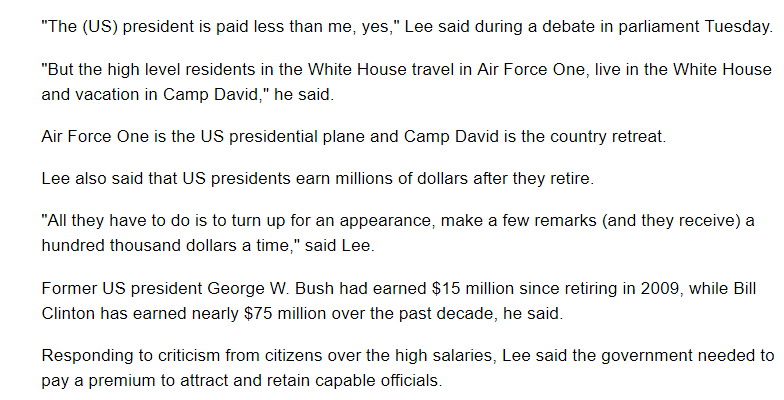 The above report means PAP ministers has to be paid high salary as they have low or no income after retiring from politics.

On the contrary, it is a sad story and bad example as Wong, a former DPM, still has value to a bank. Lee Hsien Loong had not predicted a full picture in 2012.

Wong is certainly not the case, so do many other ministers and even former and current PAP members of parliament.  Many of them hold directorships in listed companies on a “voluntary” basis.

Being a volunteer as CEO or director is not a bad option but a sad story to Singapore indeed.
at November 16, 2017 No comments:

新加坡在行动党次等文化的调教下，事实上，正在吃着老本。地铁如此，教育，卫生，人文素养（达曼说“过去二三十年来，我们的习惯并没有真正改进），这些都是吃着老新加坡人的血汗而缺少反思反省的行为。我们以前主动要争取世界第一，努力做得更加好，不然，别人会跟上。现在，吃着老本，无力争取，被动接受次等的行动党文化，被动忍受次等的服务。这是一个危机，因为，别人很快就会跟上、赶上。
at November 09, 2017 No comments:

From Russia to USA. From the PAP to Singaporeans. PAP sponsored social media content will appear overall Singapore. 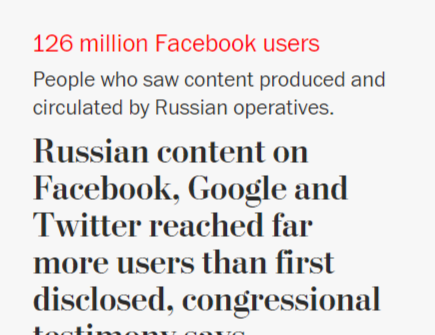 If Russians can do it in an open society, like USA, a country with freedom of speech, how do we imagine the same in Singapore when everything is controlled under a one-party state.

The US has no press control and many mainstream media was against Donald Trump during the 2016 US Presidential Election. Even with main stream media support, Clinton could not win the battle. Why?

Did Russian content in social media really have such a big impact on the outcome of the US election? It may be yes and may be no.  But certainly, Clinton campaign had her weakness. And the blame now goes to social media, especially the Russian content.

If this is true, the People’s Action Party will have to re-think their strategy. They have to worry the effectiveness of mainstream media. In “Reducing Importance of Print Media, PAP turns to Social Media for a bigger catch”https://pijitailai.blogspot.sg/2017/10/reducing-importance-of-print-media-pap.html, the PAP is gearing up in the social media. There is a limit that the controlled print media and broadcasting channels can reach.

The PAP is now talking a lot about their fourth generation leaders. The controlled media can print a handsome picture of whoever they are. But in social media, these PAP leaders are not only less popular, in addition, they are competent deficit.

If Trump’s social media strategy is right (winning election with or without Russian assistance), then the PAP will have to be very aggressive online.

If same thing happens in Singapore, the Russian content changes to the PAP content. It will definitely have a big impact, perhaps, a big election impact as big as the passing of Lee Kuan Yew.  While LKY’s impact is through controlled media not in social media. This social media deficit will have to sponsored by the PAP government.

Google and Facebook have 60% digital advertising market in the US. They may also have the same percentage share in Singapore. This digital advertising revenue can come  from everyone, including local and foreign governments. While in Singapore, it is less likely foreign governments will thrown money in our domestic market.  But the PAP government, for whatever reason, can legally advertise in social media.

When the PAP talks about the Fake news in social media, it ignores and excludes itself as they claim they have an “Ownself check ownself” system. But all other social media users are subject to their control.