PAP is so stupid: It fails to catch a mouse, now how to catch a tiger. 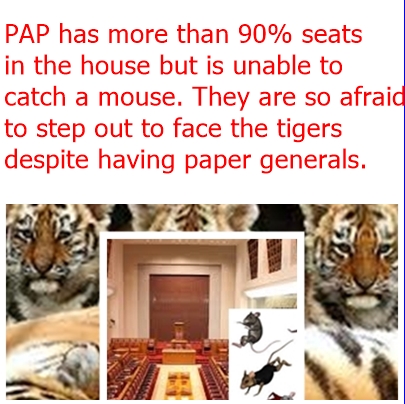 Despite having 90% seats in Singapore 12th parliament (and with 5 retired generals from the three forces), the PAP can only have themselves to blame for not able to catch a mouse. And now they let the mouse runs out of the house and turn themselves into tigers and tigress.

So stupid! With state machinery and full control of the parliament, the PAP can’t even catch a little mouse. What the PAP can do and capable of doing is to complicate the case and in some ways make-up a story.

Mo Xu You and the death of a national hero 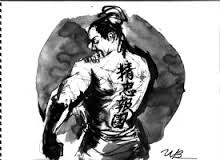 {Although Yue Fei and other war hawks had won brilliant victories and recovered the most part of the territory, it was the capitulationists like Qin Hui who wielded real power at court. They even resorted to false accusations to eliminate the war party and finally had Yue Fei sent to prison and executed. At the news, General Han Shizhong asked Qin Hui, 'What crime in the world did Yue Fei commit?' To this, Qin Hui replied evasively, 'Mo Xu You' which meant 'something fairly likely.' Later the phrase 'mo xu you' entered Chinese to mean a trumped-up charge or a fabricated charge. Yue Fei was only 39 at the time he was executed.}
http://chineseculture.about.com/library/weekly/aa041301a.htm

Now they cry high and low and complain the tigers are so strong outside and they are so afraid to send their generals and police chief to catch them. Once outside, Mo Xu You cannot work effectively as the masses are watching, the international community is watching.

The whole development of AHPETC and government grants is controlled and managed by the PAP government with the support of the media. But where is the mouse?

If such a powerful government is not able to find WP faults inside the parliament, what can they find outside the house. The irony is they will not be able to fight the tigers outside parliament.

So, they attack oppositions and question their integrity. From AHPETC to Dr. Chee’s old story, and once they find some untrue fishy story of Dr. Daniel Goh, they quickly publish it without checking.

Luck is not with the PAP

First, the PAP does not have the support of the masses. Your look at the first day of election rally, you will have the answer.

Second, PM Lee entered the wrong entry at Raffles Institution Nomination Centre. September 1 in Chinese calendar was a good foundation day and yet he failed to lay the foundation stone.

Third, his personal posters are all over Singapore during the 7th month.  In this period, children and adults must stay at home for safety reason, especially after midnight. Perhaps, he wants to empower himself from the other world so that he can catch the tigers in day time.

Fourth, the PAP positions itself as a regional party discussing local issues.  Furthermore, the PAP’s image is a past history not the future. When everyone want to talk about future and Singapore Core, the PAP just steps aside. They enjoy talking Mo Xu You.

The whole PAP election strategy is under ‘jeer’. And yet the PAP fails to understand why.