According to ESM Goh Chok Tong, Workers’ Party is like a cruise to nowhere. WP has no destination and it is a gambling ship that offers casino service. WP is a low class party and voters should reject them.  Voters can have their cakes and eat them as WP best losers can be appointed as Non-constituency members of parliament. Voters must not afraid there is no opposition members in the house.
However, at the same time, senior PAP leaders like Ng Eng Hen, Shanmugan, warn voters that WP wants to form government. Even though contesting 28 seats, they have plan to form alternative government. And WP wants to abolish NCMP, nominated MP etc when they are in power. If you watch television, they even invite Eugene Tan to talk about WP’s long-term plan of government.


What really does the People’s Action Party want to inform and tell voters?  Is WP a low class like a gambling ship? Or is it a credible party able to form government?


The PAP wants to target different voters with different messages. They are doing market differentiation. But will it work? And how effective can it be?


In one word, they want to confuse voters but at the same they themselves are in dilemma. The PAP has lost their strategy direction and they don’t know what they are doing.


Just like the case of Punggol East 2013 handling over financial statements. The PAP tries to confuse voters by turning a deficit into a surplus. Maybe the next step the PAP will say is the signatures are false. 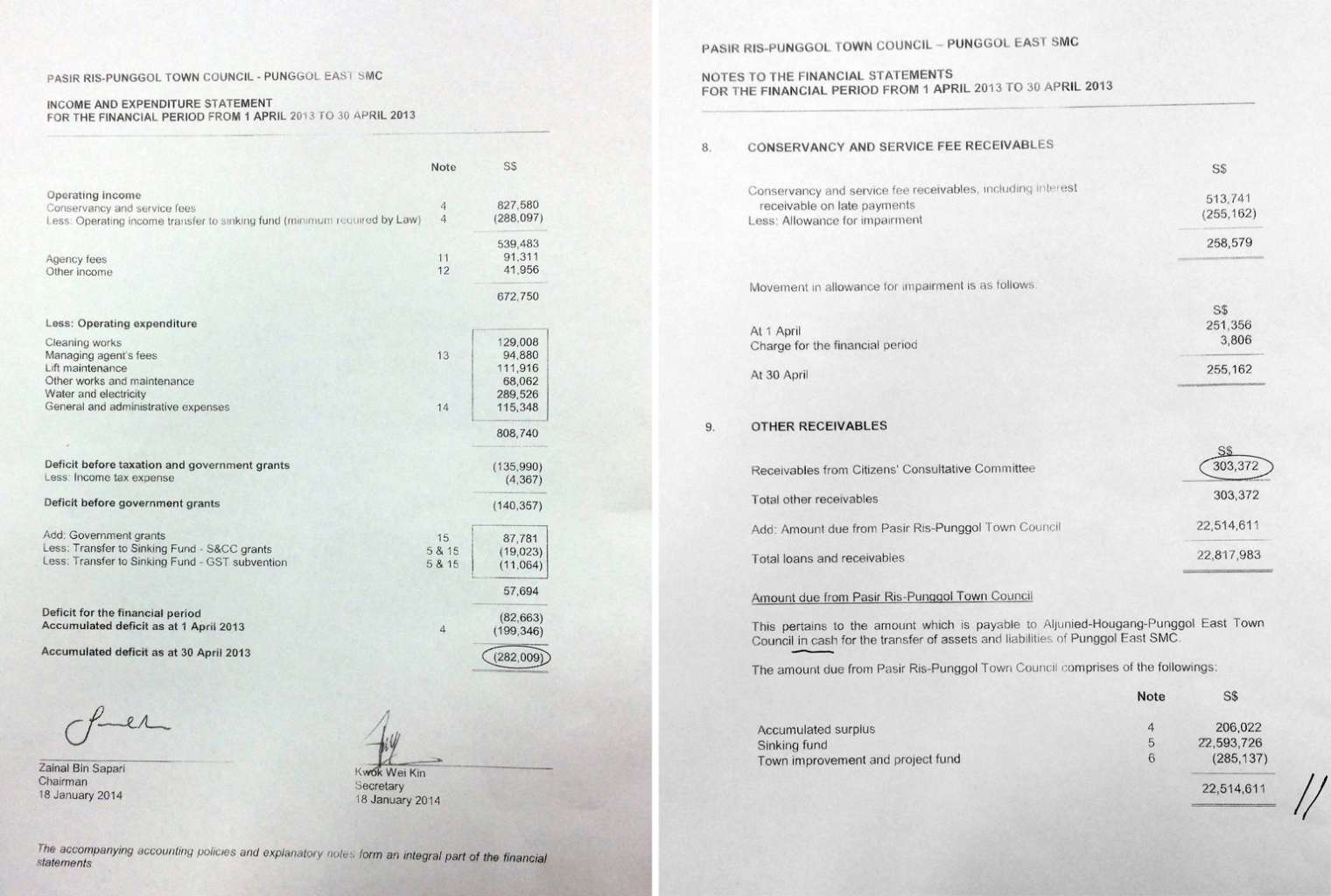 Income statement is just like Profit and Loss Account, it clearly shows that there is deficit of $280,000. If you read Annual Report, Income statement needs the signatures of directors. It is a summary report. While the $22 million transfer and other pages are explanations and detail information of the income statement (and Balance Sheet). These are notes (i.e. Notes to the Financial Statements as shown above) to the Income Statement.


Like ESM Goh and other PAP leaders, they are not sure about how to paint WP, whether low (no threat) or high (treat). When come to the explanation of the Punggol East’s deficit, they just confusing voters by pointing a big sum of $22 million. My dear friends, this money is already explained in the Notes, accounted for and is part of the Income Statement. Do they dare to use the same logic and explanation in the Stock Exchange and to the stockholders?


No wonder PM Lee also confused himself when he said, “strange psychology to think government is dying to do bad things.”  Singaporeans think differently from the PAP government as they have not benefited from the country’s progress. Voters think the PAP is doing bad things and PM Lee is so out of touch and he keeps saying the government is doing the best things, like population, immigration, education, cost of living, CPF, medical care.  There is a perception gap here and it creates confusion.
at September 07, 2015