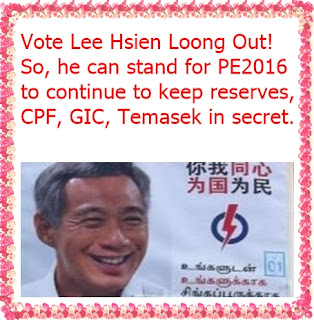 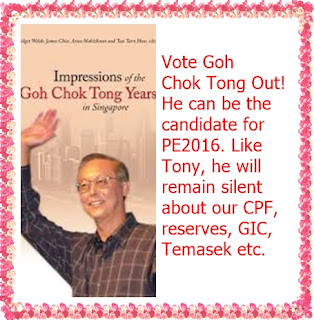 Needless to say, the first one is Lee Hsien Loong as he has made an advance announcement by putting up his posters all over Singapore.


He needs to make this move as he is anticipating he is going to lose this election. Voters are angry he uses the Group Representative Constituency to bring in 5 rubbish members into the parliament. He has insulted Singapore voters.


As he losses the first key, he will need to get hold of the second key - Elected President. Otherwise, all accounts of Reserves, CPF, GIC, Temasek etc. have to be made open. He is against transparency, checks and balances. When Tony steps aside, he will have to step in next year.


The next is Goh Chok Tong, the oldest candidate in GE 2015. Both Goh and Lee have run Singapore since 1990. They are responsible for the good, bad and ugly of their policies. He is expected to lose in his Marine Parade GRC and makes himself available should Lee decides to stay in power by the backdoor Nominated MP scheme.


Look out for this interesting development!
at September 05, 2015