It May Take Another 50 Years, or longer, for a Two-Party System to Emerge in Singapore.

If we consider the historical records of past general elections, even at SG100, we will never see the possibility of two-party system.


Look at the table below: 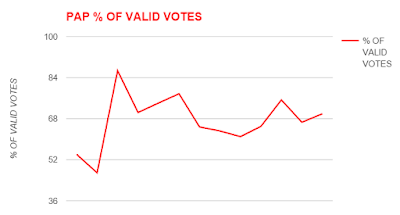 In the past 50 years, the percentage valid votes for the PAP has never gone down to 60%.  Even in 1963, it went down to 46.9% but the PAP still managed to maintain two-thirds majority in the house.


However, there are two possibilities that the two-party system may come earlier.


One is the performance of the 4th generation PAP leadership. When Lee Hsien Loong is gone after 2020, a new team of the PAP leaders will have to take over.  We have seen the lowering standard of the PAP new leadership. The PAP fails to get top guns from the business sectors, in particular, successful entrepreneurs.  Creating high value jobs will be very challenging in future.  Can the 4th PAP generation deliver a sustainable growth for Singapore? If they can’t, even they may be the best to solve economic problems, voters will want to make a change.


The other possibility is a sad story. It may happen when there are two groups of citizens: local born and new citizens fighting for each other interest in SG100 or SG75.


In SG100, there may be more foreign born citizens than local born citizens in Singapore. Both are fighting for their own interest and two political groups will emerge. The PAP may be on the central left and the other one central right (as they look for profit). The PAP will then have a different home ground, or a small home ground.


The PAP may still control the state machinery. However, the other group will have foreign influence. Both are citizens of Singapore and can participate in elections.


Wealth creates in the past 50 years may not be in the hand of the PAP. Unless we are applying universal love and we really do not mind people take advantages of our system to enrich themselves. People can leave and go as they wish as far as universal love exists, our aim is to help the world to create more millionaires and super riches.


These are two possibilities that will bring down the PAP.  The PAP has successfully created a political system to create a ‘sure win’ election for themselves. However, they fail to realise a poor 4th generation within their rank will bring two-party system forward. Externally, outside Singapore, a big non-local born citizen population will also create challenges to them - a foreign talented political force.


What do you think? Which outcome do you prefer?