“This is me” – A Self Ignorance To Change The PAP

“This is me” is the campaign message that PAP new man, Dr Koh Poh Koon, wants to bring to Punggol East voters.  He wants to be his “own man” not a “status quo” person. He even emphasizes his past and poor background as a proof.

And he hopes to change the PAP internally rather than externally (joining opposition).  So, he chooses to follow the PAP stream instead of against the PAP stream. Perhaps, it is an easy way in Singapore politics, just like joining National Conversation, one think he can change the government.

In the front page story of today’s Lianhe Zaobao, Dr Koh also said it was not an “in” thing to join the PAP.  But, he chose to join the ruling party in hope of an internal change inside the PAP. #1

Here is the brief translation of what he said and published in Zaobao:

“If I have strong views on adjusting, strengthening, or changing (government) policy to improve the life of people, there are only 2 ways: joining the oppositions and bring out the alternative suggestions with strong criticisms; otherwise, thinking of how to change, how to change (the PAP) internally.  My view is instead of working against the stream why don’t I follow it.”

He chooses to follow the PAP and still keeps saying he wants to change the PAP from inside.

So, Dr Koh’s ignorance is “joining the PAP is not the ‘in’ thing, not fashionable.”   (榜鹅东补选 加入行动党不时髦 许宝琨：希望从内部作改变) . He was quite absent minded that he forgot the case of $2 PAP owned company and the AIMgate. Joining the PAP can make one hold several directorships and so there is an opportunity for Dr Koh to upgrade his HDB flat to a private property. Of course, he can follow Halimah, the new House Speaker, continuing staying in a HDB flat.

Membership of the PAP MP does have its privilege.  It is still fashionable to join the PAP and thinking a ways of how to make use of it. Halimah may be the only exception.

His second ignorance is his “This is me” attitude to change the PAP internally.  There are so many senior members ahead of him, in what capacity, he can initial a change.  Who will support a new man, even George Yeo is not able to do it, how “This is me” can change the PAP.

“Always here for you” better than “This is me”

He wants to project himself as his ‘own man’ like Desmond Choo.  But “This is me’ looks no better than Desmond Choo’s “Always here for you.”   At least Desmond is looking forward to serve You, the residents and voters.  But Me = Self, your interest is not his first choice. He is “me” first, “you” second. Punggol East voters should ask him the difference between “me” and “you”.  Will he always here for you as he promises despite the BE result?

Dr Koh can choose to be his “own man” but if he wants to change the PAP internally, then his membership of less than one month is really too ‘young’.  And first of all, he must learn to serve You first, before talking about changes of the PAP.

He is a PAP man wearing the logo of the PAP. If a green bird standing for election always want to be his ‘‘own man”, then PM will not be able to sleep well from now. In the next GE, he will have so many independent minded PAP ‘own man’ candidates, where can he find time to ‘fix’ the oppositions?

And in the process of recruiting candidates, all of them want to stress “This is me” and “own man”.   Wow! Suddenly, it is so fashionable to be “own man” and perhaps it is an “in” thing in future Singapore politics, at least for the PAP candidates. 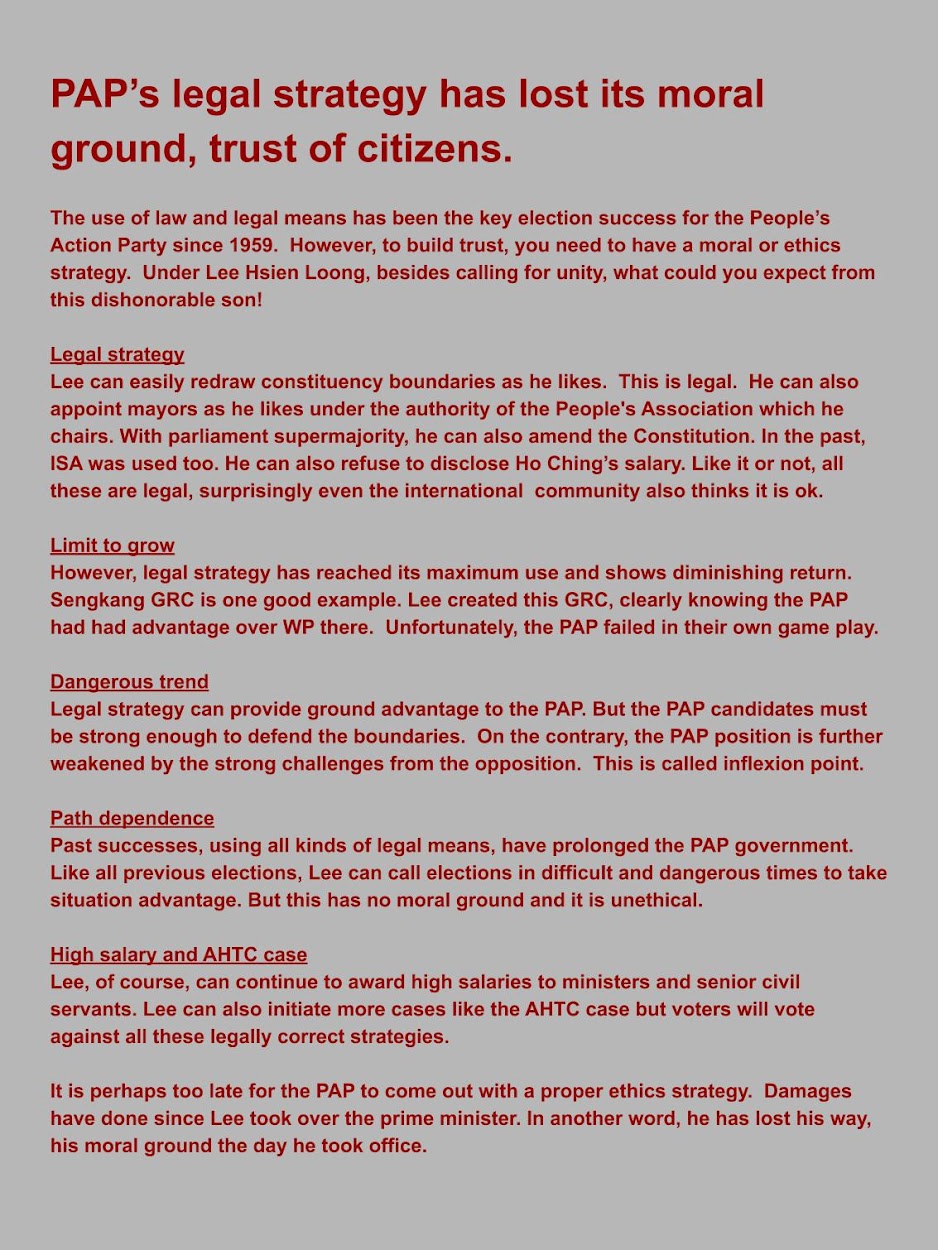