Why our NE never turn children into the PAP supporters?

Why our NE (National Education) programs never turn children into the PAP supporters?
July is the busy month for school children. Many schools are involved in the National Day Parade as participants and all schools celebrate National Day with a message from the education minister.
For Primary five school children, it is part of their NE program to attend the National Day Parade rehearsals in person. Transport and food arrangements will be provided to bring them there.
This is the experience all school children have to go through and it has become a growing up program for school children since our independence in 1965.
I read with interest the following 2 articles from the :
Do July 4th Parades Turn Kids into Republicans?
All that fireworks-watching, flag-waving and potato salad-eating this weekend could in fact lead to a vote for the Republican party for your child.
And the stats from Harvard back up the claim. When children were exposed at a young age to the fanfare associated with the Fourth of July, they were more likely to vote Republican and make campaign contributions to the party. 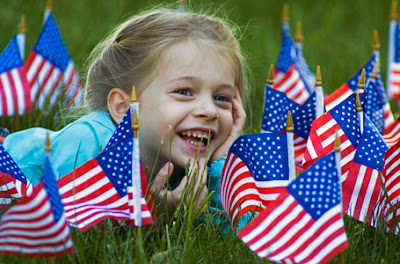 A young girl watches a Fourth of July parade in Great Falls, Virginia. And a new study shows she's more likely to become a Republican.
Getty Images
US children who celebrate Independence Day more likely to become Republicans, says Harvard study
A study conducted by Harvard University researchers has concluded that children who attend an Independence Day celebration are more likely to become Republicans as adults.
Even attending a single fireworks display or flag-waving parade, specifically celebrations without rain, can be predictive of a child's future political leanings and voting habits.
(http://en.wikinews.org/wiki/US_children_who_celebrate_Independence_Day_more_likely_to_become_Republicans,_says_Harvard_study)
PAP must be very angry with our NE programs
Every year, the Ministry of Education spends millions of dollars to educate our children, especially, the contribution of the PAP to our country. A young adult in would have celebrated at least 10 to 12 National Day celebrations in schools.
How come they are different from the American children? The younger they are, the higher the education they have, they are more likely to vote for the oppositions.
NUS Institute of Policy Study did a post-GE2011 survey and the just released results are quite different from the Harvard study on American children.
The IPS finding as reported is: “More older voters and young people, as well as those with a higher level of socio-economic status, are "pluralists". These are voters who want more diversity in politics. “(new.xin.msn.com)
Republicans would dream to have our NE
If the has our NE programs and every child celebrates Independence Day on the Fourth of July, the Republicans would have gained majority of supporters in the .
Unfortunately, this is not the way to educate children in the . It is not compulsory to attend Independence Day celebrations. Perhaps, the Republicans should introduce a bill to make NE a compulsory in the and it is good for their future.
Are we tired of NE?
is going to celebrate National Day again on the Ninth of August this year. It is not easy to get a ticket to attend the celebration parade.  Many people attend the event year after year.  Are they belonged to the same cluster of people? If it is a wide-spread event, then the NE effects should have influenced the voters.
May be we should think of a creative way to engage people to celebrate National Day?  This is especially true for the PAP. They should think very hard how to make NE an asset rather than a liability to them.
If the National Day parade is still organized by the military, being part of their military exercises and operations, it will be really hard to make them think out of the ‘disciplined’ box.
at July 12, 2011