Don’t judge a person by his language ability

Don’t judge a person by his language ability
“Of course, my English is not as good as MM Lee’s. But, his Chinese is definitely not better than mine. “ - Low Thia Khiang
http://enquirer.sg/2009/01/19/overcoming-the-deafening-silence/
I was at the Deyi nomination centre to show support to the oppositions. And I was glad that I had witnessed a very important event and a historical  moment in history. There were two sitting opposition MPs venturing out of SMC to contest in GRC. And there was a possibility that would end with no elected opposition MP in the House. The result as shown in GE 2011 is now a history - a sweet memory.
While taking photos, I noticed a not so perfect (left) ear of Low Thia Khiang.   I though this was born like this only until I read the posting of ‘overcoming the deafening silence’ http://enquirer.sg/2009/01/19/overcoming-the-deafening-silence/’ 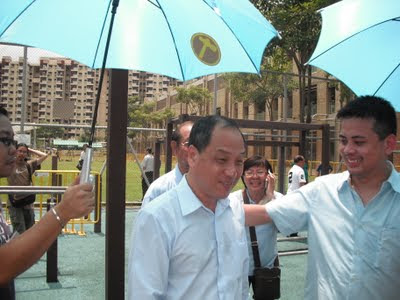 Low Thia Khiang at the nomination centre
Low injured his ear during his NS as disclosed in the post. In fact, it was quite common for NS men to get ear injuries in the earlier years of National Service as the protection was not as good as today.
Another President’s scholar was out and down
George Yeo is the second President’s scholar, after the defeat of Mah Bow Tan in Potong Pasir, to be defeated in a general election.
The success of WP team in Aljunied is of course a team work but without Low, there is no guarantee that WP would win the race so handsomely with certainty. A Chinese educated Low led a team of underdogs beat the English elites led by a President’s scholar in .  Is this a double defeat for the PAP? A common man poor in English and a non scholar beat an elite scholar who has good command of English.
Hearts are not won by good English
No wonder Lee Kuan Yew got so angry. How can a third-class (Nanyang) university graduate, likes Low, beat a President’s and SAF scholar, likes George Yeo, who graduated from and Harvard?
People, who know about the history of Chinese education and Nantah in , will think this is a mission impossible.  With the hard work of Low, quietly serving in Hougang SMC for 20 years, he finally breaks a GRC and makes history in .
The government and the PAP have spent millions of dollars training all these elites to take over the running of the country and now suddenly they are not sure of wining in the election. Are tax payers money well spent? Or are the PAP training paper generals for the election?
Just like Chiam See Tong said he got only 5 ‘O’ levels but he defeated a President scholar in Potong Pasir.  More are to be expected in the coming election. 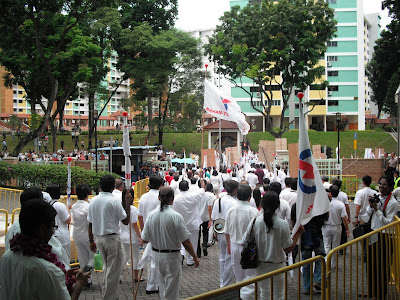 PAP supporters marching out of Deyi Nomination Centre
A re-run for coming PE?
What’s wrong in ?  The best educated elites from the PAP cannot win the hearts of the people. And people who spoke broken English or less perfect English won the race.
Will there be a repeat in the coming presidential election?  Tan Kin Lian who speaks less perfect English is closer to the people and beat Tony Tan who is proficiency in the English language but keeps himself a distance away from the common men and women.
Go beyond English first
If you look around our local entrepreneurs, especially those older generations, and you will realize how good their English are. They may not speak good English but they are intelligent, smart and they employ many graduates, some even elites or at least from elite schools.
With the passing of Lee Kuan Yew’s era, we really need to re-look our English first policy.  In markets like , South East Asia, and even , the knowledge of local language and culture is far more important than the good English that our education system claimed to produce.
Indeed, we are doing in out universities and research institutes already.
English first or research first
Many have complained the English standard of our foreign imported lecturers, professors and researchers in our local universities.
The PAP is quite double standard in this aspect.  When they want high quality researchers, they are not so concern about their English proficiency. They want local universities to have quality research papers published in international journals or magazines.
By doing so, they are quite flexible. The English first approach can now change to research first.  Who know, in the near future, it can be baby first, foreign first or money first (oh, they have been doing so already)?
Will they one day dare to acknowledge People First?  However, it is not decided by the PAP but by the People Power of Singaporeans.
at July 14, 2011