Use Hammer to Break Window Glass


Use Hammer to Break Window Glass
The next time, you board a SBS bus; please take note of a sign in the window.  I did not notice this until nomination date. On 27 April 2011 morning, I decided to take a bus instead of driving there from Hougang to Ang Mo Kio. 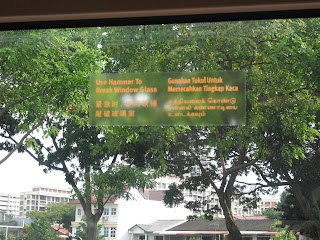 Sitting on the empty bus, I was free to look around and took a photo of this notice.
I was very happy when I saw the notice. It seemed to suggest that the iron curtain was soon to be pulled down. The highly protected GRC ‘window glass’ was to be broken by a hammer.  True enough.  As we all know by now Aljuneid GRC was taken over by Workers’ Party on 7 May 2011.
The PAP is such a strong and powerful party. It is hard to believe the PAP firewall can become so weak that it turned itself into a window glass to be broken by a WP hammer.
Lonely opposition supporters
I left home at about 10 am and arrived at Deyi Nomination Centre at around 11 am.  Immediately after the bus passed a Chinese temple, I alighted. I prayed to the temple for fairness and let the oppositions be given a chance.  It was raining. I waited for a while but later decided to walk across the road to make use of the HDB flats as cover.
By chance, I walked pass a PCF kindergarten. In an open space, some one smiled at me and seemed to know that I was going to Deyi nomination centre as I was wearing a light blue long-sleeve shirt.
Finally, I saw . The road was empty with only police controlling the area.  I needed to cross the road so I pressed the traffic light button.  I waited for the light to turn green and walked across the road. I reminded myself to be a well behave supporter – to follow the rule even there was no traffic.
I was a lone walker and there were no other people in the street. I had to walk pass a side gate for candidates first and then to the main entry of school for party supporters. So, I was walking from one end to the other end of the school.  Anyway, I walked confidently and slowly as I knew what I was doing.
I know what I am doing
There were already many men and women in white, many more arrived after 11.30 am.  Half of the school field was occupied in the sea of people in white. The other half was reserved for supporters of the oppositions. And it was only 20% or 30% full.
As I did not want to wait under the hot sun, I walked back to the school building and again there were many people in white sitting there. I got a little bit of worry that how the oppositions could beat the powerful and strong PAP election machinery.
The reality is different
The PAP supporters were all over the Deyi nomination Centre and they were very well organized.  This was very different from the opposition supporters who wore different color, came alone or in a group of 2 or 3 with a clear mind and heart.
The reality is that the PAP may be able to use their strong machinery to bring people here but the PAP is not able to bring their hearts or other people’s hearts to the nomination centers and rallies.
You may be able to show wonderful pictures with huge turnout at nomination centre but again there are more Singaporeans openly attending opposition rallies with their hearts in the evening.
We will make a breakthrough
I liked the way Sylvia Lim said it, “We are determined to make a breakthrough in Aljunied GRC.”  She was so much confidence in GE2011 as compared to GE2006.  So do WP in GE2011. 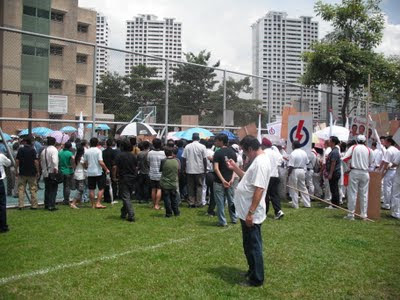 WP candidates thanking supporters caused a 'traffic jam' at the exit of the school field.
You can watch the video of the nomination day speech of WP Aljunied team here. 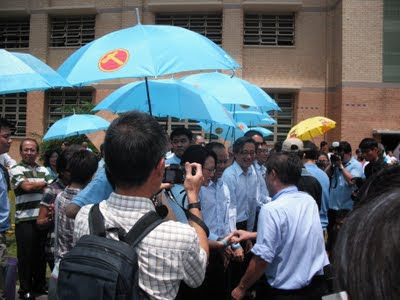 WP candidates shaking hands with supporters under the hot sun
I shook hands with all the WP candidates including the one standing in a SMC at the nomination centre.  I wished them good luck and I told them that ‘they must win’.  I openly told Sylvia, ‘You have my vote’.
Who is closer to the hearts of the people?
Here is the youtube video on how WP candidates greeted their supporters immediately after the official nomination announcement.
http://www.youtube.com/watch?v=rsAhn3AkHJI&feature=related 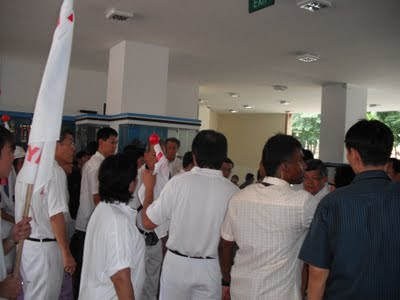 Can you recognize the PAP candidates in this picture?
It was a very different rapport between the PAP supporters and their candidates. They basically went their own way after the confirmation of candidates. Their supporters marched in and out like school children – no bonding, no eye contacts, only perhaps discipline.
Here is a picture and you may be able to recognize the PAP candidates in the picture.
There is no chemical, no rapport and no human touch between candidates and supporters for the PAP.  No wonder the window glass of Aljuneid GRC was handsomely broken by a hammer!
When I was about to leave the nomination centre, I saw only 3 buses and 1 van waiting for WP supporters.   This was a huge difference from the PAP. It taught me a lesson that an election is won by hearts not machinery. 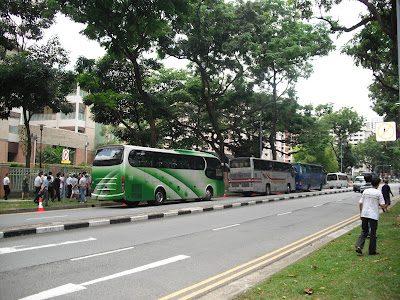 A GRC is won by supporters of 3 buses and 1 van?
Just like the Chinese saying 得民心者得天下.
Whoever wins the hearts of the people will rule the country.
at July 10, 2011