Seeking middle ground or joining the media if you want Singapore to do well?

It looks like we can make a difference if talented Singaporeans join the main stream media and contribute to nation building. Since when journalism in Singapore has such a tall order! Therefore, the alternative is to seek middle ground between MSM and social media.

So, is this a view of a frog or a butterfly? Yes, if you think the MSM is an open space not a well. No, it is indeed a deep well with limited and controlled press – our press freedom ranking is at the bottom in the world.  Therefore, it is better to seek the middle ground.

“If you are committed to this nation and want it to do well, join the media.” 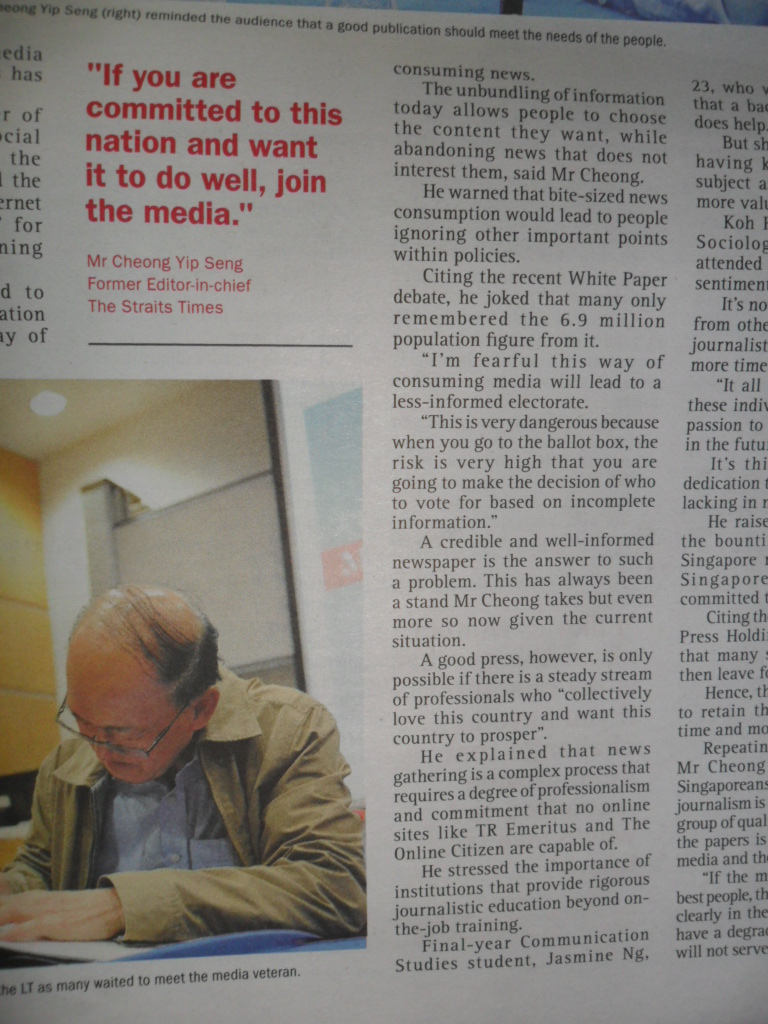 The Nanyang Chronicle (above) has the following report:

[Citing the recent White Paper debate, he joked that many only remembered the 6.9 million population figure from it.“I’m fearful this way of consuming media will lead to a less-informed electorate.

“This is very dangerous because when you go to the ballot box, the risk is very high that you are going to make the decision of who to vote for based on incomplete information.”

A credible and well-informed newspaper is the answer to such a problem. This has always been a stand Mr Cheong takes but even more so now given the current situation.

A good press, however, is only possible if there is a steady stream of professionals who “collectively love this country and want this country to prosper”.

He explained that news-gathering is a complex process that requires a degree of professionalism and commitment that no online sites like TR Emeritus and The Online Citizen are capable of.]
http://notinwater.com/?p=613

Cheong likes an old horse or an old bottle, still believes a government-controlled MSM can continue to contribute and move the country. He still hopes that with more die-hards “collectively love this country and want this country to prosper” joining the MSM, Singapore will be in a right direction.

Only frog does not know MSM is not independent.  Cheong’s calling is just like he is shouting from a well and telling the butterfly to join him that there is a beautiful world inside the limited space and controlled well.

If the MSM really has done its job independently, then there is no necessary to have a middle ground as what Kishore Mahbubani said in his article “Singapore's biggest blessing: Safety”.

[In this middle ground, we should reach clear agreement that some of Singapore's painfully developed public institutions should be protected and strengthened, like the SPF.

If we don't develop this middle ground and if a significant percentage of Singaporeans begin to demonstrate a lack of trust in our public institutions, trouble may begin brewing around the corner. This lack of trust can suddenly manifest itself in different ways.]http://www.straitstimes.com/breaking-news/singapore/story/singapores-biggest-blessing-safety-20130413

Kishore Mahbubani at least is well informed of changes in news, information, and communications.  He has recognised the important of social media and the effect of ‘some bad’ blogosphere.  Unlike Kishore Mahbubani, Cheong still thinks the ‘online sites’ are not professionals.

Professional or not, Kishore Mahbubani has pointed out the ‘danger’ blogosphere will bring. It will undermine or affect the confidence and trust of Singapore public institutions.  Wow! This is certainly different from Cheong.

[However, if the blogosphere and the mainstream media cannot agree on a core consensus of preserving and supporting key public institutions, we could end up with a messier Singapore, becoming an unhappy frog rather than a happy butterfly.http://www.straitstimes.com/breaking-news/singapore/story/singapores-biggest-blessing-safety-20130413

Of course, if we do a simple comparison, Cheong will be the unhappy frog and Kishore Mahbubani a happy butterfly.

As for professionalism, just imagine if the social media has 1% of the budget and manpower of the MSM what difference will it make?  It the government is really looking for the middle ground, perhaps it is not a bad investment to invest in the independent social media, rather than continuing wasting money and time in the negative return MSM.