Does full retirement of Hu Jintao mean anything to the PAP and our Parliament?

Even Hu Jintao dares to do it, why the PAP old guards still feel the uncertainty? Hu made history in the recently concluded party congress of Chinese Communist Party for leadership renewal. He stepped down from the important posts of party chief and military head - not to forget China is a nuclear power and is modernising its forces.

One important factor of recent Chinese politics has been that even when the Chinese leadership retire, they still exert a phenomenal amount of power. This looks similar to Singapore.  When Goh Chok Tong became Prime Minister, he needed a senior minister. When Lee Hsien Loong took over the PM post, he needed two.

Only last year, after the general election, the PAP felt they had to face the reality and decided to let go the SM, MM, and 2 unpopular ministers.  However, is this arrangement a ‘full retirement’ of former ministers?

No. They are still collecting pay checks from the Parliament.  They may not have influences over government policies, however, they are certainly not fully retired from politics and not to forget they can still vote in the Parliament.

It is time they do the honourable thing to resign from Singapore Parliament and let others make more meaningful contribution to the Parliament. There are at least 5 former ministers (Lee Kuan Yew, Goh Chok Tong, Raymond Lim, Mah Bow Tan, and Wong Kan Seng) in the current Parliament.  They should not behave like Jiang Zemin or Deng Xiaoping but follow the footstep of Hu Jintao.

“Setting a precedent from his predecessors, outgoing Communist Party chief and President Hu Jintao has stepped down as chairman of the Central Military Commission (CMC) and made a historic full retirement from power.

Unlike late strongman Deng Xiaoping and former president Jiang Zemin who held on to their CMC posts despite retiring as the Chinese Communist Party (CCP) general secretary, Mr Hu has decided to hand over both hats to Vice-President Xi Jinping, who will also assume the presidency next March.“http://www.straitstimes.com/breaking-news/asia/story/hu-jintao-steps-down-chairman-the-central-military-commission-20121115

The PAP should let go of these old guards and calls for mid-term by-elections to replace them. They can use this opportunity to show Singaporeans that the current team is a “new’ team without the influence of the old guards.  It can also prepare new and young ministers to face the reality of elections and their popularity.

However, this only involves 5 MPs and few GRCs. If we look at the current PAP MPs, they are (more) behaving very similar to Andrea Yu, an Australian journalist famous for asking ‘soft’ questions during the CCP congress.

“AUSTRALIAN journalist Andrea Yu has had the questions turned on her after a series of 'soft questions' at the Chinese Communist Party congress.Yu was later revealed to be an employee of a company owned by the Chinese Government and based in Australia since 2009.

Many were surprised when the Australian was allowed to ask questions at the Chinese leadership event. That is normally reserved for Chinese journalists who are supportive of the government.Yu has been criticised for failing to ask tougher questions and instead using the floor to quiz China's leadership about Australian-Asian relations and Melbourne's sister-city connection with Tianjin.

The ABC's China correspondent, Stephen McDonnell, asked Yu if she was called to ask questions because it was known that she works for Global CAMG Media International, a majority Chinese-owned company. CAMG is also affiliated with state-run Chinese radio."I honestly don't believe people in the Chinese Government knew who I was," she said.

Yu has only worked for CAMG for about a month but admitted that her questioning is influenced by who she works for.

Do the PAP MPs speak like Andrea in the Parliament?  Do the Government Parliamentary Committees really speak for the people or the PAP? Many have described Andrea as a ‘beautiful flower’ in the Congress, but really, does her presence make the Congress a step forward or backward in openness?

At least, at the end, Andrea Hodgkinson Yu is a cover girl: 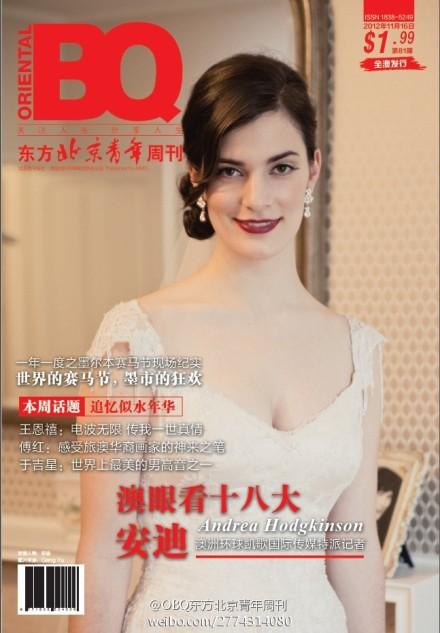 And interestingly, she seems to have 2 names, one outside China and one inside China.

So what we have is Andrea Hodgkinson giving her name as Andrea Yu to foreign reporters but who is known in China as Andi. Got it?Read more: http://www.businessinsider.com/hu-jintao-to-fully-retire-report-2012-11#ixzz2CM18yRLH