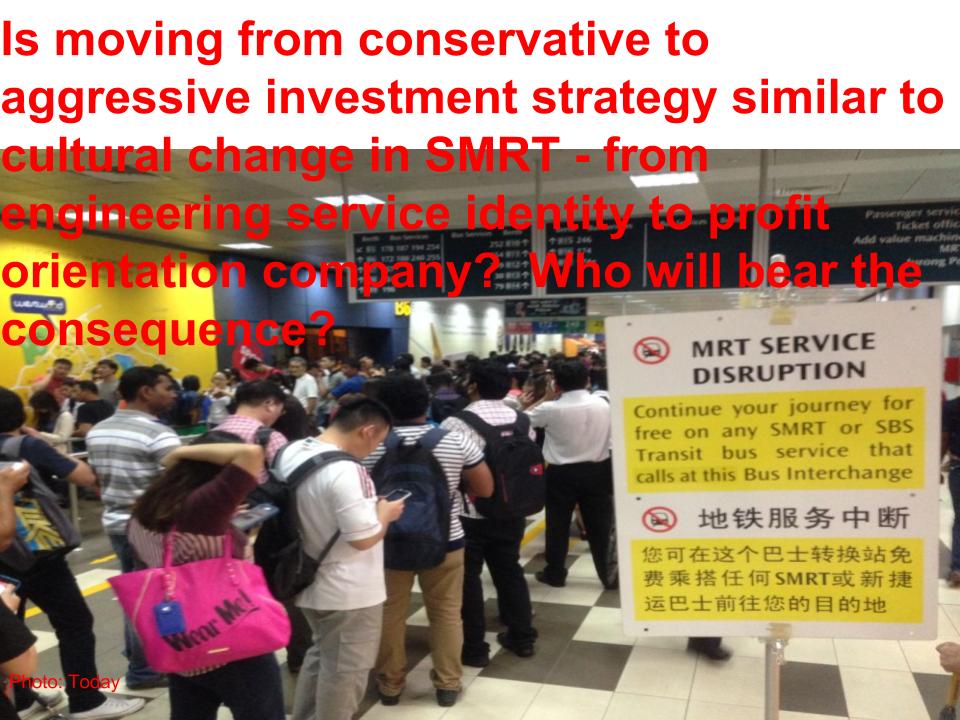 Fullerton is a specialist in Asian emerging markets and NTUC Income is an insurance company.  Insurance has to be risk aversion to protect policyholders and so adopts ‘conservative and dividend’ portfolio strategy. While Fullerton is looking for growth and aggressive higher risk/return.  By appointing Fullerton as fund manager, NTUC Income is expecting higher returns but also higher risk.

Will this partnership affect the relevant benefit of Income policyholders? Statements and press report have not mentioned the risk factor but only the positive win-win outcome for both companies minus policyholders.

[CPF Board and Temasek Holdings]

In a similar situation, it is like CPF Board indirectly (through government bonds) appointing Temasek Holdings/GIC as fund manager.

CPF Board and NTUC Income respectively have duty to protect the interest of CPF members and policyholders.

Could this appointment match the Chinese proverb of ‘keeping the goodies within the family’? (肥水不流外人田) NTUC Income’s S$23 billion assets are two times bigger than Fullerton’s assets. However, with the strategic partnership, Fullerton will now manager S$40 billion assets and become a major regional fund manager.

During Asian Financial Crisis, in July 1998, the government announced the selling of POSB to DBS.  The Ministry of Finance statement said:

The acquisition of POSB helped DBS jumped instantly from 90th to 65th largest bank in the world bank in 1998. Not only that, it also provides a strong deposit base (and reserve ratio) for DBS.

By injecting S$23 billion of Income assets into Fullerton, besides fund management expertise issue, could there be other reasons?

[Too big to fail]

9 years ago, there was a World Financial Crisis, several ‘too big to fail’ financial institutions were bailed out by the US government. One of them is AIG - an international insurance giant.

Singapore is using citizens’ money to build up Temasek and GIC. By injecting Income’s S$23 billion into Temasek’s Fullerton, Temasek will become even bigger. One important consideration is NTUC Income is a union based insurance company and many Singaporeans are policyholders.

There are commercial risks by moving investment strategy from conservative (Income) to aggressive (Fullerton). Based on the recent performance of Temasek, one will wonder whether it is a safe move.

Our ex-President Tony Tan has reminded us not to make judgement on face value:

He urged people to question what they read, exercise judgement, and not to take information at face value

Is moving from conservative to aggressive investment strategy similar to a cultural change in SMRT - from engineering service identity to profit orientation company?  Who will bear the consequence?

We now blame SMRT has a culture issue but who was making such a cultural shift then? Temasek or the government? Can we consider NTUC Income is also making a cultural change now?
at December 11, 2017