Israel: From An Idea to A Multi-Party State Singapore: From A Colony to A Dynasty, A One-Party State 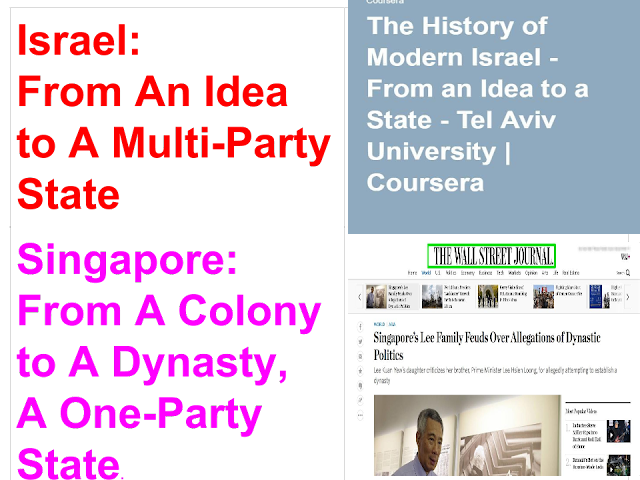 
PM Lee Hsien Loong talked about “Israel’s story ‘resonates with, inspires S’poreans’” in his recent visit there. What does he mean?


1 Colonization vs. diversification
Singapore continues to practice the colonization institutional rule. ‘Divide and rule’ is the PAP approach. Since 1959, the PAP has purposely abused or took advantage of institutional power, which they inherited from the British, to make Singapore a one-party state. While in Israel, all political parties or ideologies have to accept and respect each other, perhaps this is why they agree with a proportional representation system of parliament.
Long before the PAP, Sir Stamford Raffles had an idea to make Singapore a centre for commerce and trade. In 1819, before Hong Kong, Singapore was already a colony and the British had monopoly power in administration.  When the PAP took over the administration in 1959, they happily continued to implement this monopoly politics.


However, the idea of Israel comes from the Zionism.


[The Zionist Jews were influenced by the phenomena of European nationalism.
National movements, spread all over Europe during the 19th century, where large groups of people defined a collective identity by investing meaning to ethnic historical data. ]#1

The Zionist movement was never homogeneous, and reflected by birth orientation, social context, and political affiliations. Practical Zionism, Political Zionism, and other Zionism - Religion, Culture, Socialist etc were established one after the other. But they manage to combine their resources to turn their common idea into building a nation state. They continue to do so even after independence.


Many of the PAP leaders are educated in the West but once they take over the power, they practise exclusive politics, e.g. control of media, election matters, even in non-political areas, like Malays in the military, job disadvantage for Chinese educated Singaporeans, job preference for foreigners etc.


Similarly, the idea of a state of Israel came from Europe. They have not given up this idea.


[the Zionist movement was a modern human endeavor, based on human responsibility. ]#1


[One of the most important contributor to Zionism derived from disillusionment from emancipation. ]#1

While in Israel, they are to depend on inclusiveness to unite the country. They may have disagreements where media outlets are subject to military censorship and gag orders but Israel is considered as a free press country by Freedom House: ‘The legal standing of press freedom has also been reinforced by court rulings citing principles laid out in Israel’s Declaration of Independence.’


3. Different cultural approaches and gaps
Culture and religions are important parts of the establishment of Israel. They have to maintain their language and culture even the early immigrants spoke no Hebrew. While in Singapore, our mother tongues are called second languages.


The PAP has failed to see the importance of diversity. They only have the idea of a center of commerce and trade.  The Singapore’s today is a long way from our National Pledge.


With all news reports from our mainstream media, have Singaporeans learned something from PM Lee's visit to Israel, Jordan and the Palestinian? Have we seen the differences?

#1
The History of Modern Israel: From an Idea to a State, Coursera@Tel Aviv University
at April 23, 2016