According to the Global Trends 2030 #1, a majority of global citizens feel that current government structures are  inadequate to face future challenges. Will Singapore be an exception?  For example, an efficient tax collection system does not mean it understands the tax burdens of the people.

Even the PAP government claims to have first class public administration, the recent policy solutions and responses have failed to gain public confidence and support.  (Or less  public confidence and support as compared to SG50 era).  We are no exception to the global  trends.  More and more non-traditional players, NGOs, will participate in the debates besides a stronger opposition.

Down the road, not only the PAP has to discarded their old and ineffective SG50 model, the oppositions and other players will have to adopt new models too. All of them can not ‘copy and paste’ the old SG50 model. They will have to seek new creative solutions and balances in public policy challenges.

Under SG50 model, it is a PAP-led and government controlled environment. Any public feedback is just a submission and selection process. In the past, the so-called high public support or confidence was declared without checks and balance, transparency and accountability.  The post-SG50 era will be very different.

Professor Aric Rindfleisch of University of Illinois at Urbana-Champaign explains the digital concept of customer co-creation as follows:

In the digital world, both customers and firms can lead and co-create values for a product/company. The contribution can come from a fixed or open environment. Fixed contribution means the contribution is related to the product. Open contribution has no restriction.

With small modification, this concept can be translated into a relationship between citizens (stakeholders) and government.

Under SG50 model, if there is any co-creation activity, it is in SUBMITTING. Feedback Unit, People’s Association, NTUC, bilingualism,  ...etc are all under this category. They all work under a fixed contribution environment.  Citizens submit their views and opinions. The PAP government selects and then leads the changes.

We hardly see Tinkering, Co-designing and Collaborating in action. However, in the post-SG50 era, public policy discussion will have to have more involvements of non-government actors and of course, oppositions participation.

It also means Singapore has to move away from the fixed and government-led Submitting box to the other three boxes. By doing so and moving away from the old PAP SG50 model,  more co-creation contributions led by citizens, in an open environment, can then be generated in Singapore.   It brings out our potentials.

Let look at some examples:

MediShield reform: The PAP government appoints a committee to study MediShield and medisave contribution, the committee then  submits a report to reform the medical insurance system and covers all Singaporeans. As this is a stakeholder issue, some co-designing and tinkering are needed. But they are absent in this exercise.

Little India Riot report: Again, the PAP government sets up an inquiry committee. It is again a Submitting.  The Little India Riot
is a complicated issue and involves immigration, population, treatment, psychology, living condition etc.  The report fails to consider open and non-riot views.  It fixes itself into the Submitting box.

Yale-NUS college: This liberal college is again led by the government. The format and organisation is different from Yale in USA. It has a chance to move from Submitting to Tinkering - open environment.  However, under SG50 model, it remains in a government-led and closed environment as politics is only allowed within the campus.

There are too many examples of Submitting under SG50. Control of mainstream media, Population White Paper, Committee on SMRT strike, NTUC, PA, RC, CCC,  Nominated MPs, election boundary redrawing, NDP, Chingay Parade, school advisory committee, etc.  All these look efficient but are they productive and effective? They make contributions led by the PAP government in a fixed environment. This is the so-called success model of  the SG50 - a box of group thinking.

In paper, we do see some relaxes in Tinkering and Co-designing. For example, Hong Lim Park is the only place that Singaporeans can have legal protests. However, one will need to apply for a permit and the government can still suspense the activities there.

We may find private-led activities by some foundations making contributions in Co-designing. For example, Tsao Foundation, Lien Foundation, Shaw Foundation,  they are engaging and promoting social benefits/goods.  However, they have to work under the fixed environment, perhaps some guidelines too. They will not venture into Collaborating.

The PAP government in many ways is against Collaborating.  Here, there are alternative views or views different from the government. Social media is part of the digital world and new media. The PAP government and their leaders are banning or charging netizens, like ‘To Singapore, With Love’, The Real Singapore, bloggers, Amos Yee, etc.

There are four segments of co-creation contributions. Submitting is the PAP government comfort zone. They are discouraging Tinkering and giving instructions to Co-designing.  Collaborating is the activity that they want to ban, charge and discipline.

This is the current picture of co-creation. Do you think this can last forever? This is like an airplane flying with one engine.  We must turn on the other three engines to release our potential by having more citizen engagements. 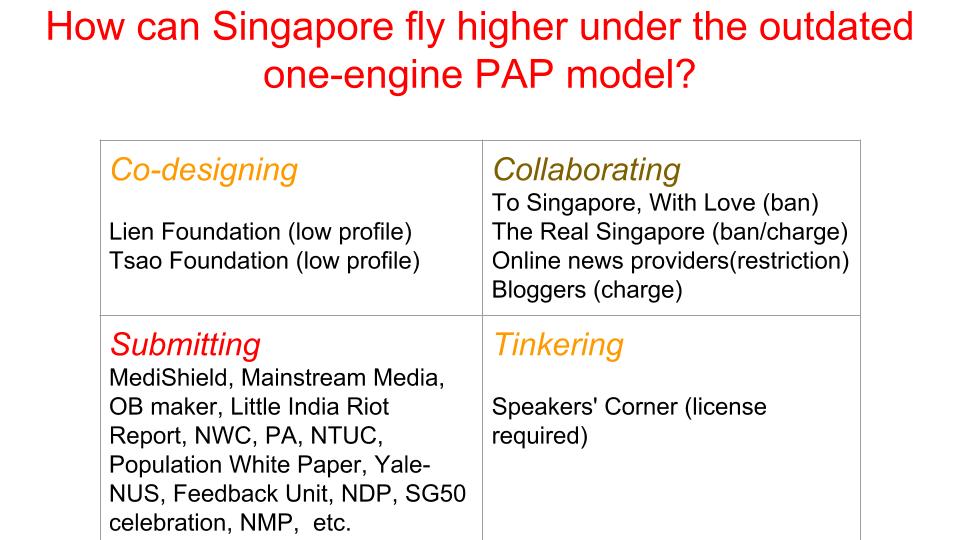