[From the HDB upgrading to co-signing cheque payments, the PAP has invented one more Distributive Injustice - an upgraded version of their money politics. MND’s withholding money to opposition town council clearly shows their continued discrimination against citizens once again.]


In the case of Ministry of National Development versus Aljunied-Hougang-Punggol East Town Council (AHPECTC),  MND is applying to appoint an independent accountants/auditors to co-sign cheques for fresh grants from the government.

The PAP government has many schemes for grant and research fund applications. Many small and medium size companies and research organisations have benefitted from these schemes. They apply for the grants and the government disburses the money in part or in full to them.


These new fresh funds will then transfer to the bank accounts of the applicants.

Does the government impose a co-sign system to safeguard the fresh funds? Whenever the applicant’s CEO or finance director signs a cheque, do they need to seek a second signature from the independent accountants?

SMEs know too well that their operations and productivity will be affected if there is a required co-signature. They will wonder who is the boss? The government or the SMEs.


In the MND vs. AHPETC case, AHPETC was officially elected by voters in 2011 (and 2012). Voters, like the shareholders, can vote the AHPETC management out in the coming election (for companies, in a general meeting or an extra general meeting in case of emergency).


This is why Attorney-General’s Chambers, representing MND, has to create terms like ‘short of fund’, ‘technical insolvent’, to justify the application. When a company’s cheque has to co-sign by an independent accountant or auditor, it is no more a simple auditing purpose anymore. It goes beyond the question of accountability and transparency. For SMEs, it means some kinds of ‘judicial management’ are taking place.


In business, when a company is in financial trouble or insolvent, judicial management can become a rescue plan to save the company.  The Courts, upon application, can appoint Judicial Managers to temporary run the company.


The PAP government is technically asking some judicial powers to manage the fresh funds from the Courts. They even want to have more powers to examine past accounts.

Just like the estate upgrading case, the PAP government has failed to respect the wishes of voters. Voters wanted Workers’ Party to run the estates and AHPETC was created by majority of voters in Aljunied, Hougang and Punggol East..

The application has gone too far and it is against the Constitutional right of the voters.


Once again, this is the money politics of the PAP - a continued distributive injustice.  Through judicial management, they want to have a hand in the management of AHPETC. They fail to understand who the real bosses of Singapore are. 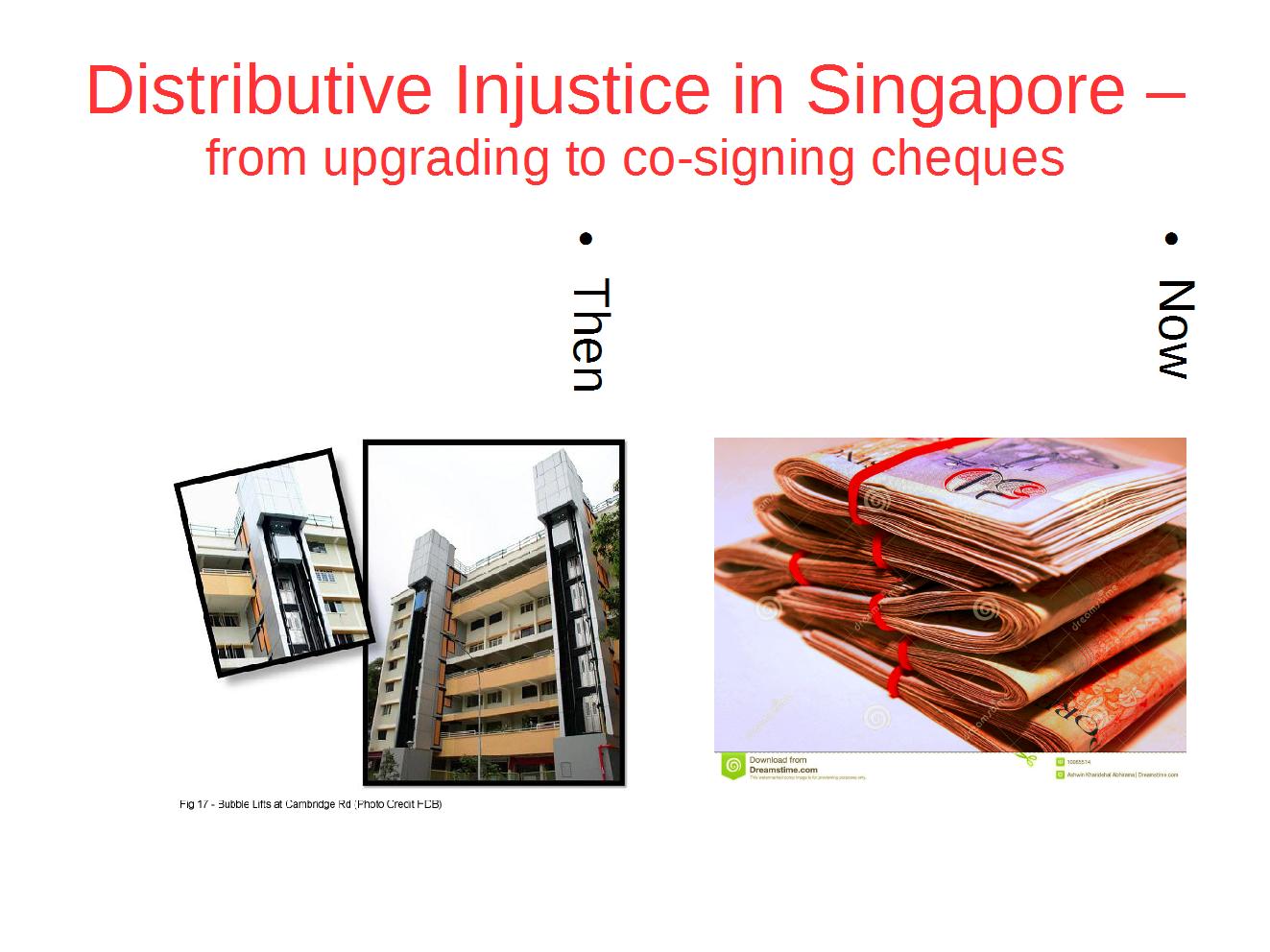 Now we look at another side of the money politics. The PAP has a long tradition to deny upgrading projects to opposition wards. This outdated model of distributive injustice has consistently rejected by voters in Hougang. So, the PAP think tank needs to have some new ideas to fix the oppositions. The withholding of grants from MND is one such new idea.


This injustice is like when everyone is entitled to receive CPF medisave top-ups, cash bonus, pioneer generation bonus, SG50 baby packet, etc except citizens in AHPETC managed constituencies. Residents in AHPETC do not have the same treatments as other Singaporeans even though they pay taxes accordingly.


The PAP is saying they are withholding these fresh grants/payments as they have outstanding issues with AHPETC.  Do they know it is similar to withholding payments of CPF top-ups, Pioneer Generation packet, SG50 baby packet to citizens in Aljunied, Hougang and Punggol East.


Withholding fresh grants is a discrimination against Singaporeans living in AHPETC estates. When the government top-ups CPF for citizens, giving cash bonus,Pioneer Generation and Baby packets to citizens, do they ask for credit reference, personal character, belief, marital status or race before disbursing the money or gifts to citizens?


Without the fresh grants, the PAP claims that AHPETC will be ‘short of fund’, ‘running out of money’. Like a local government with no business revenue, one way of solving this cash flow problem is to raise maintenance and conservancy fees. If this is the case, the PAP can then claim AHPETC is not managing the estates well as they have to increase the fees.


Whether it is from judicial management point of view or distributive justice point of view, the PAP government is making use of money politics to intervene the Constitutional rights of the citizens. They are trying to use the legal means to get themselves (indirectly involved through so-called Independent Auditors) in the running of town council.  They certainly do not respect voters who rejected them in 2011/2012.


In fact, the Courts should have thrown out the application if they consider and respect the election results in Aljunied, Hougang and Punggol East.