SAP (Special Assistance Schools) schools offer Higher Chinese but students can also not to take Higher Chinese as a ‘O’ Level exam subject. Recently, my friend gives me another reason, perhaps a rather ridiculous one. TAKING HIGHER CHINESE MAY MAKE THE GCE ‘O’ LEVEL CERTIFICATES LESS PERFECT!!! If you score all ONE except Higher Chinese, like the following example. 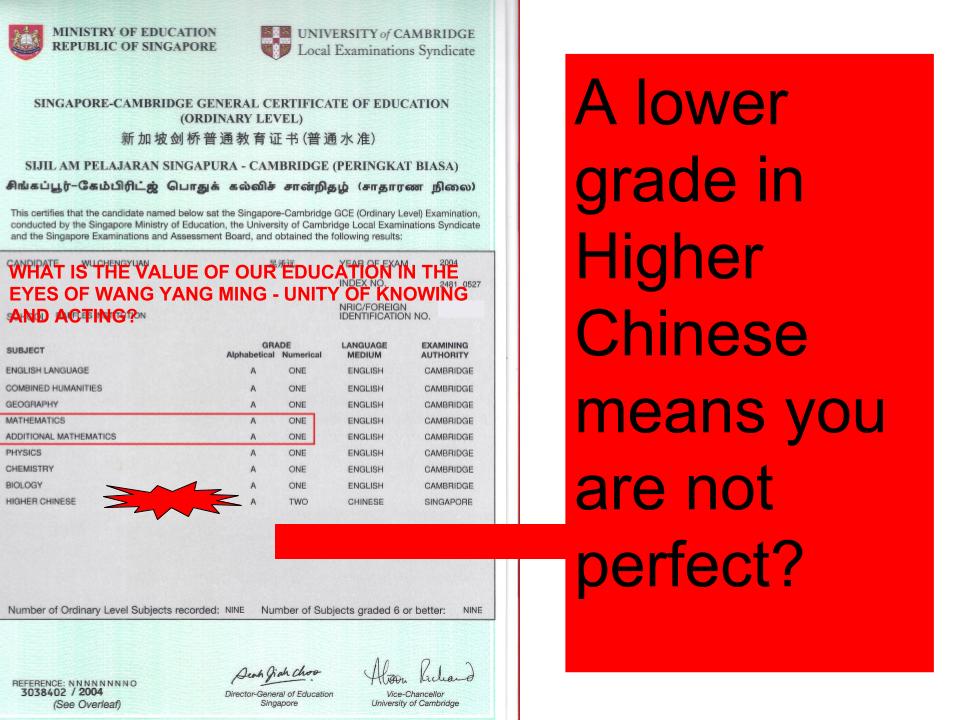 My friend also prints another picture. When his child collects his certificate, the teacher has to use a spray to darken his hairs in order for him to meet the school rules for certificate collection.

What kind of value education are we given to our children?  Despite knowledge learning and bonus points for JC admission, our students choose not to take Higher Chinese exam for fearing to be a perfect scorer. Without asking right or wrong for hair dying, the teacher just wants to help the students (to fulfill the school rules) to get their certificates.

No wonder, quite frequently, we have similar news like

Son of senior lawyer hauled to court for evading NS


People who know the system are most likely to abuse the system? Why is the teacher spraying the hairs? What will a less perfect score with Higher Chinese downgrade a student? These show how we prefer short-term solutions over longer term solutions. We are giving ‘get rich quick’ value to our students.

In Singapore, when discussing about Chinese language learning, there are many debates, controversies. Some are true, some are false.

However, even you study Higher Chinese, you may not know Wang Yang Ming. (https://plato.stanford.edu/entries/wang-yangming/)

This is the point I want to make.

Wang Yang Ming’s father was a Zhuangyuan, the first scholar in Ming Dynasty Imperial Examination in 1481. Few people know about his father. Although Yang Ming passed the Imperial Exam, he was not a Zhuangyuan. However, his achievement is many thousand times of his father and his influence is all over China, Japan and Korea, and even the modern world.

Ma Ying-Jeou even wrote about his ‘unifying knowing and acting’. 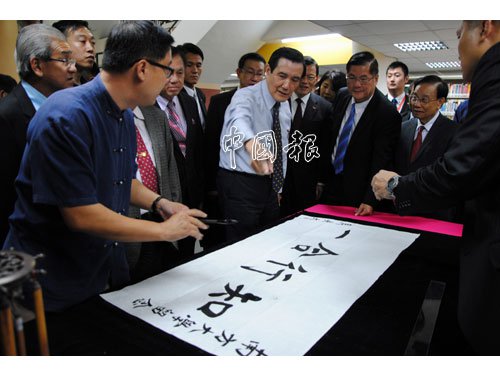 Perhaps, the most applicable learning example for foreigners is Japanese admiral, Togo Heihachiro who led the Japanese fleet to victory in the Russo-Japanese War (1904–05).  Note: Not promoting Japanese militarism.

I am not  sure whether our Defense Minister knows Wang Yang Ming or the Yang Ming influences to the above mentioned politicians.  If he knows, he must be a failed learner of Yang Ming School.

If Singaporean officials know more about Yang Ming, described as the ‘cream of crop’ in traditional Chinese culture by Xi Jinping, our handling of the Terrex army vehicles in Hong Kong will be very different. We may have received the vehicles long ago.

‘Unifying knowing and acting’ is a famous philosophical concept by Wang Yang Ming.

For the case of the senior lawyer, knowing seems to result to another, opposite way of acting.

For the case of the teacher, spraying hairs seems to suggest a quick escape route, a by-passing way for the students to get the certificates.

This is the story of Singapore education.

Look at the way bicycles and personal mobility devices travelling on footpaths you may already know the answer.

For Singapore economy to grow further, we need investments.  Unfortunately, these includes Chinese investments. We cannot be a Southeast Asian hub or regional centre if the soon to be world number one economy does not put their investments here.

And sadly, we think our Chinese B, Chinese O or even Higher Chinese can handle the job requirements of Alibaba, Huawei, wechat, Lenovo, ...etcs.
at January 15, 2017