Despite uncertainties ahead, perhaps the only certainty for big development is ‘One Belt One Road’. To guard and protect the developments along the belt and road, Shanghai Security Cooperation, with the joining of India and Pakistan as full members in 2017, is playing a key role in the new silk roads.

Shanghai Cooperation Organisation (SCO) is a political, economic and military organisation and her main concern is security. The SCO is primarily centered on its member nations' Central Asian security-related concerns, often describing the main threats it confronts as being terrorism, separatism and extremism.
(https://en.wikipedia.org/wiki/Shanghai_Cooperation_Organisation#Membership)

Under this framework, democracy is secondary. SCO’s main focus will be economic development under the state-led capitalism. China and Russia are key partners in SCO, with India and Pakistan joining SCO soon, in term of population, this will be the biggest Co-op in the world.

Looking back in history, this is just a continuation process of the past 2500 years of silk and spice roads. 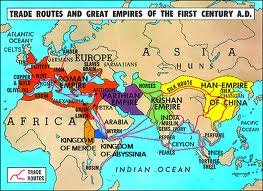 UNESCO has maintained a site for silk and spice routes that provides historical background of the past.
http://en.unesco.org/silkroad/about-silk-road

2017 is an interesting year for state-led and state-sponsored capitalism over the world. In the SCO zone and Belt/Road development areas, we will see big developments led by states and state-owned businesses, of course with Chinese investments and AIIB (the Asian Infrastructure Investment Bank) money.

Let take the example of Aleppo, there is a recent peace deal led by Russia and Turkey. When there is stability and security in Aleppo, foreign investments and business will come, in particular Aleppo is part of the silk road. In history, Aleppo was taken over by Alexander the Great in 331 BC, more than 2300 years ago.

The Aleppo peace deal is an initiative without American participation. What does it mean? Peace in the middle east can go without the USA but with Russia, SCO and bigger countries in middle east.

And it seems to match Donald Trump’s foreign policy as he wants to engage in his state-led capitalism. Trump wants manufacturing back, big corporations (with tax cut) back, infrastructure development back in USA. His policy, although without certainty, will be very different from Democrats or may even move away from the known and usual democracy principles.

In Europe, we face uncertain elections in the Netherlands, France and Germany. States will have to play bigger roles to convince voters they can deliver security and stability to the people. What can democracy help to ensure security in Europe?

Singapore is an odd example

Singapore is well known for her state-led economy and capitalism. Even the town council management is an extension of state-sponsored business activities.

Singapore’s mindset, in fact, is very close to SCO which places security, stability, non-interference in domestic politics over democracy. This framework works well for Singapore. Since independence, Singapore is operating under state capitalism with full control of internal affairs.  By this analogy, Singapore can easily and comfortably fit into belt, road and SCO zone developments.  However, we seem to at odd in this certain development in 2017. Why?

If you look at the way we handle the Terrex issue, we are just see the small issue of protecting assets and fail to see the bigger issue. No matter how well you protect your assets, there is always a bigger picture of guanxi.

No wonder, if you read Chinese, the advertisement put up by Zaobao at the right, seems to suggest our economy is in bad shape and we need to start a future economy???

In discussion of future economy, are we just concerning about ‘protecting our assets’ or trying to improve relationship?
at January 02, 2017