50.39% - Mission Impossible for the Oppositions?

It takes 21 years for Joseph Schooling to achieve 50.39 seconds and winning an Olympic Gold for Singapore.


It may take another 21 years, 4 or 5 general elections later, for oppositions in Singapore to reach 50.39% of the popular votes.


It sounds meaningless to link swimming to politics. It is a fallacy as sports is above politics as seen in parliament where both the PAP and WP congratulates Joseph for his achievement.


However, both involves competitions. In every competition, you have winners and losers. And as Joseph has rightly put it to win is to beat others. 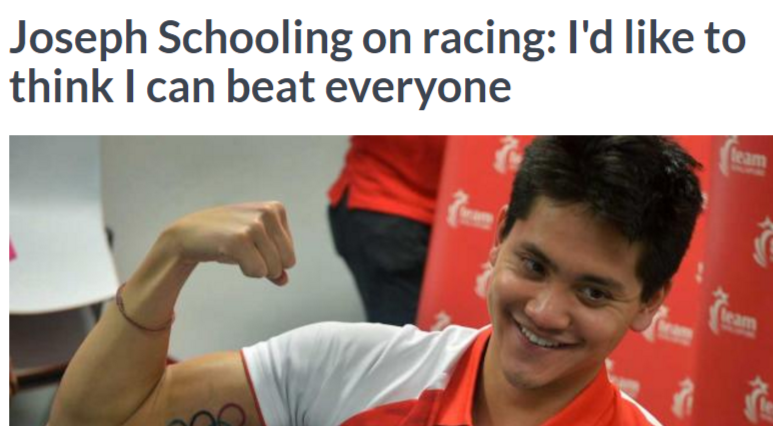 
In politics and during general elections, you need to beat your opponents to win enough popular votes. It is understandable why the PAP talks so much about problems at Aljunied-Hougang Town Council and so little (downplay) about the lapses mentioned in Auditor-General Office Report. They want to score political points and get more votes.


So is winning an Olympic Gold easier or more difficult than beating the PAP? More difficult if one judges from the result of GE2015.  Why?


[Changing rules]
In an Olympic game, whether swimming or table-tennis, all rules are made known in advance. There is an international guarding body overlooking the rules, including doping issues.
While in Singapore, election rules are set by the PAP. You don’t know the date. You don’t even know the boundary of your constituency. You train very hard in a constituency, for example, 100m butterfly, when election comes, the constituency disappears after the boundary review. For swimming, it means 100m butterfly is no more a competition item despite all the hard trainings you put in.


Singaporeans must understand a competition in Olympic is fair and equal than our general elections.

[Funding and supports]
Schooling family spent S$1.35 million to fulfill Joseph’s Olympic dream. How many families in Singapore have million dollar cash? Singaporeans are asset rich cash poor.  We salute Schooling family for making such a big sacrifice for Singapore!


In Singapore politics, oppositions are both assets poor and cash poor. Even in the ‘meet-the-people sessions, opposition members of parliament have to use HDB void decks to conduct their activities. However, the PAP can make use of all government resources, in particular People’s Association.


For the PAP, it is from ‘ownself check ownself’ to ‘ownself finance ownself’.


Without funding and supports, how far can the oppositions go? According to Dr Chee Soon Juan of Singapore Democratic Party, it is ‘redouble effort’.
(https://www.facebook.com/cheesoonjuan/videos/10155392179278849/?video_source=pages_finch_main_video)


It is not only a doubling effort but a long-term effort. We all know in the next one or two general elections, the oppositions can gain more votes and seats but still far from 50.39%.


[External training - outside mainstream]
Singapore certainly does not have first class training expertise for our sportsmen and sportswomen.  Whether local or foreign talents, one will need external training and foreign help to excel.


This is why Joseph has his training in the US. And because of this, he is not a mainstream product of Singapore sports.


For oppositions in Singapore, there is no external training opportunities. Even there is one, they have to watch out of ‘foreign influence’ and be accused of ‘betraying Singapore’.


But at the same time, the PAP has established cooperative relationship with Chinese Communist Party. There are frequent visits and exchanges from both sides.  They learn from each other? When the PAP leaders visit important Western countries, they always meet both the ruling and opposition party leaders.  Why? Why do they need to learn from foreign oppositions?


No external training, no funding, no resource, unable to set the competition rules, oppositions can only do it alone. Most likely they have to work outside the mainstream as all state resources are out of bounds to them.


[Investing young leaders]
Joseph indicates we have to work at a young age. We have to take the alternative, non-traditional way.


If 50.39% can only be achieved after 4 or 5 general elections later, then there is an immediate task for the oppositions: invest and attract young leaders in their 20s, 30s and early 40s.


To beat the mainstream PAP, the oppositions is to take an alternative way, a long way and a difficult way. Not only that, it has to start early. We need new and young bloods to join the oppositions. We hope the success of Joseph can change the viewpoints of Singaporeans towards the oppositions.


Joseph’s success has proved that with a smaller support and limited finance - family, relatives, friends, spirit and moral helps, one can still be a champion.


With at least 30% support, there is still hope for the oppositions.


We need young Singaporeans to join the oppositions. And we must support and encourage them to do so. Joseph has clearly shown us with determination and confidence of beating everyone, one can achieve his/her dream.

Youth is an asset. And Workers’ Party has it all.