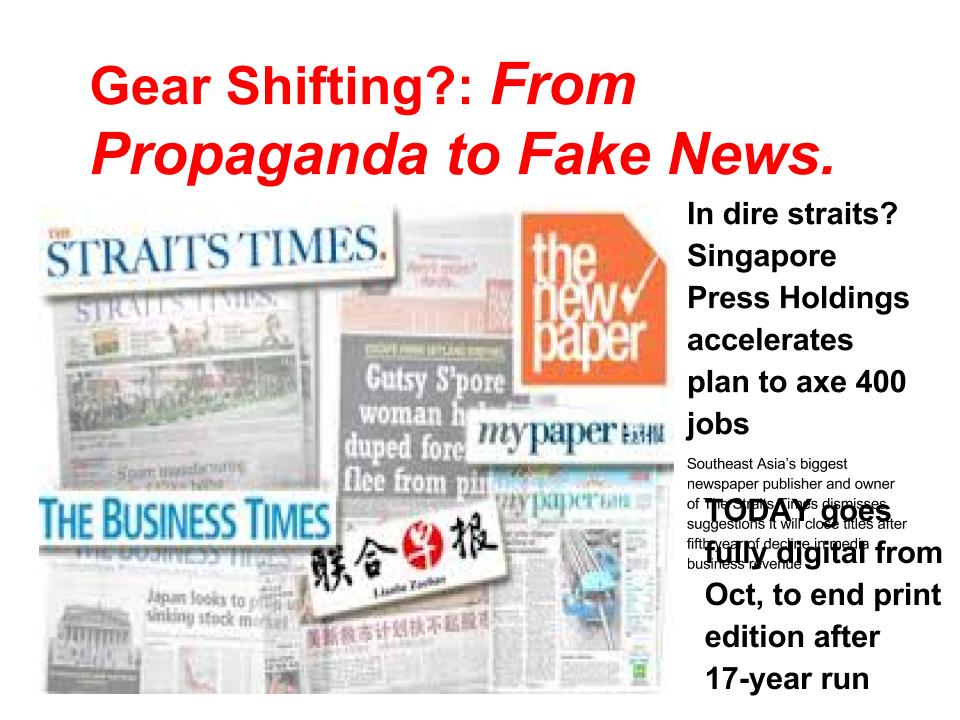 We need to see the recent events in print media as a total package. Singapore Press Holdings, Mediacorp and the People’s Action Party are three in one. When there are changes, we cannot view them as business decisions. These are propaganda shift and the new strategy is to occupy and control the social media.


It is easy to make SPH profitable by just given them a piece of good land or good deal. It is even easier to make Mediacorp cash rich by just providing more funds in the Budget.


However, the PAP has to consider the return on investment. The same money spent on print media can also be spent in social media, even with a lower budget. But the print media has reached its peak while social media has greater and faster influence with less demanding quality control.


Some of the retrenched journalists can be sponsored into social media activities. Just take 20% or 30% of the cost saving in SPH and Today and invest in social media, the impact will be bigger than continuing their employment. These social media sites can be a one-man show or a group of individuals and work alongside with the 50 Cent Party.


This is a strategy shift, from a once successful propaganda print media to possible Fake News makers.


Print media always claim they have quality control, especially the Straits Times. They are proud of themselves but to the PAP, they are just tools. However, we have to admit from time to time they do provide useful information. They can write their reports 20% right 80% misleading; 80% good news 20% bad news; good news first bad news last. You can see these examples in their MRT reports or parliament reports or poverty/inequality level.


However, for social media reporting, Fake news reporting can totally on the 80% misleading, ignores the 80% bad news and only report on good news. The public, without further check and consideration, will believe all the PAP good news. Alternatively, they can also concentrate reporting on bad news about the oppositions. The easier one is suspected sex affairs, suspected corruption, suspected mismanagement of town councils.


The PAP’s strategy is actively moving into social media which with careful observations, you can see they already achieved some successes.


This is why even making profit, SPH still wants to fire journalists. Having easy money from the government, Today still wants to go digital without print version.


The PAP does do their homework. They consider tradeoff and cost-benefit analysis. Today’s last day of print is the last day of September. Why? It can still be useful if there is no walkover in PE2017.


From the strategic point of the PAP or Lee Hsien Loong, print media carries negative return or less importance as compared to the past.  They have less influence over the younger generation.


The same money can be best spent on sponsoring social media in Singapore. These sponsored sites not only can attract younger voters, they can also create fake news as independent news to either confuse the public or create the image of open society. Of course, with the standard decline of our foreign and diplomatic judgement, we certainly need more foreign correspondents to have more foreign feedback.


If you look at SPH as a part of the PAP government machinery, it is better to refocus efforts on productive areas. Print media has lost its usefulness, except perhaps, for the older generation.  For example, there is no intention to close down or merge the two evening Chinese papers.


The treatment of retrenched journalists is less important. The PAP government, since the day of Lee Kuan Yew, has only considered them as a political tool. The PAP can turn them left, right or center as their wish. And, Singapore journalists never say NO.


Being a tool, you have no control over yourself. You have to accept the treatments the Master gives them to you.


Journalism in Singapore is a job, an occupation not a duty. Like what the PAP is promoting, you can be rich in every field, provided you do your job right - right politics, right economics.