WHO IS TO DEFEND THE 10M POPULATION IN SINGAPORE?


This question looks remote. Then how about who are the defenders of the more than 5 million people in Singapore? The automatic and natural answer is the national service personnels, and in a more inclusive way, all under the Total Defence.

There is no official denial of the 10 million population. It looks like the PAP-led Singapore is getting serious to be a future super city. With a weak or softening property market, it seems to be a good idea to come out with this suggestion.  It will help to push or sustain the property price and stabilize the market.

The citizen army of NSmen will then have to protect 10 million population as well as a bigger economy, several times larger than the current size. This, of course, is a happy picture if the projection is correct: bigger population, bigger economy,  and higher GNP per capita (but necessary a fairer distribution of income).   With such a richness and wealth, who is going to protect Singapore? Foreign talents, foreign workers or maids?

Foreign talents can find opportunities elsewhere. Perhaps, foreign workers and maids will have less choice, either to return to their home countries or move to other places. What if they decide to fight along side with Singaporeans against foreign invasions, will we grant them and reward them with a citizenship for their sacrifice?

It is easy to increase population by just importing foreigners. Not only for Singapore, people from lower income countries or developing economies are willing to risk their lives to find ways to go to USA, Europe and Australia. If USA is to announce a free entry of 10 million people from any place in world, it can easily reach this target within a few days provided logistics and transportation problem can be solved. 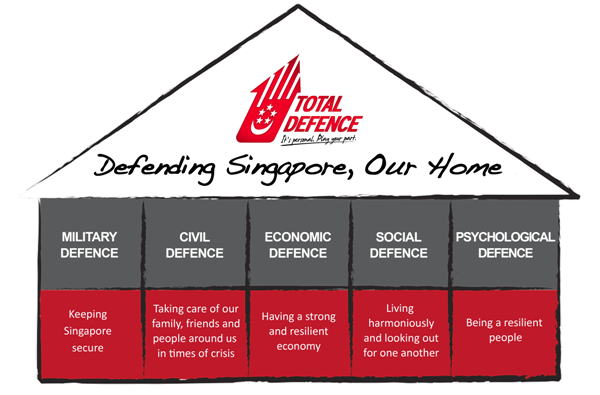 In the total defence concept, economic defence is just one of  the five pillars. As explained above, the military defence, even equipped with modern weaponry, is not capable to defend a population of 10 million, perhaps not even 6.9 million.

In addition, in a state of low public trust and divided Singapore, it is equally challenging to maintain a high level of readiness for civil defence, social defence and psychological defence. What can the PAP promise or assure Singaporeans a bright future with this constraint and without transparency and accountability?

Social media and opposition politics have enlightened Singaporeans. Singaporeans now demands more information, open debates, and don’t believe ‘the PAP is always right’. Even if there is no objection of the Total Defence concept, people will question the rational, the connections, and the effects of the increased population.

Who are we defending in a Singapore of 10 million people?  When about half of the population are not Singapore citizens, how do we define ‘our home’?  We really need a re-framing, re-definition of Singapore, our home?

We will have to re-examine the Total Defence in a wider and broader way too.

[Total Defence involves every Singaporean playing a part, individually and collectively, to build a strong, secure and cohesive nation that is prepared and able to deal with any crisis. It is our approach to dealing with threats and challenges that arise.] www.mindef.gov.sg

What is the meaning of 'every Singaporean' in a future city of 10 million people? Will there still be a PAP government in future where this Total Defence is based?
at August 04, 2014