Down of Park Geun hye and the post-chaebol era

The removal of Park Geun hye as South Korean president is so remote and seems irrelevant to Singapore. Yes, indeed. How could we imagine such thing happening in Singapore? It is really beyond our imagination that our prime minister or president will have such an unfortunate ending.
Park’s father was a military dictator whose biggest contribution was his bold and ambitious industrial plan that had laid the foundation for today’s South Korean economy.
The World Bank has recommended low and middle income countries to learn from South Korea. South Korea has successfully moved from a highly controlled state to a democracy. Without judicial independence, checks and balances and democratic movements, it is impossible to remove Park.  (Just comparing this to similar situation in other Asian countries).
The downfall of Park reminds us that when we go to the poll we must always judge the candidate’s qualification and not his father’s contribution to the nation. As part of the Confucian culture, Korean voters do value the past contribution of their founding father. We can see Park’s senior citizens supporters crashing with the Police after the announcement of the Constitutional Courts.
The father’s contribution cannot guarantee the success of the next generation. It can also be a ‘heavy’ liability as in the case in Taiwan.  We may not want to go the extreme case of Taiwan. But certainly, Singapore way of loyalty is also another extreme case that cannot guarantee our long term sustainability.
We need to seek a balance between the two extreme cases.
The Park case can provide such an direction.  Not only in politics, the South Korean economy will also see new alignment - post-chaebol era.
The chaebol system is like our GLCs (government-linked companies) as we don’t have a strong private economy. 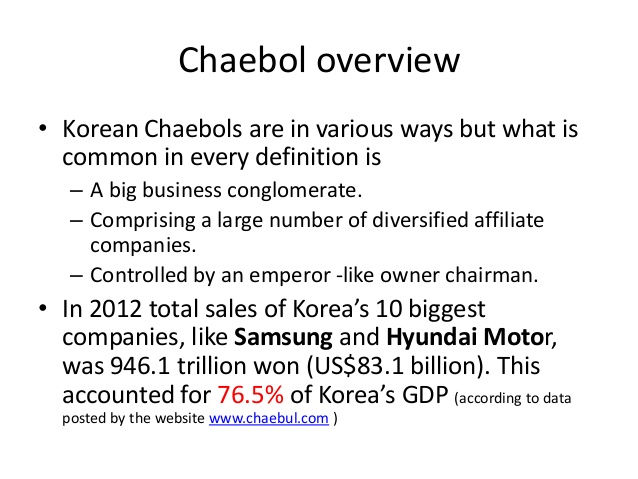 The chaebol system has received many criticism for entrepreneurial development.


Many young Koreans voted for Park in 2012. Many also protest and want her to be removed in 2016 and 2107. Koreans now want political democracy as well as economic democracy.


Look at Singapore, we have neither political democracy nor economic democracy. How long can we sustain?


###
{KOREAN INDUSTRIAL DEVELOPMENT in brief}
Korea gained independence immediately after the end of second world war (1945) but since 1948, Korea has been separated into North and South. We focus our discussion in South Korean economy. Korean industrial development can briefly divide into the following stages:
[1950s: Anti-inflation and import-Substitution policies]
Due to Korean War, Korea needed to implement anti-inflation policies(currency reform, money supply restriction, government budget balanced, increased supply of consumer goods).
After the War, Import-Substitution policies (Protection of domestic industries, allowing monopolistic competition in the beginning, financial subsidy) were implemented. For example, promotion of 3 Whites (cotton, sugar and flour) to discourage import of these goods.
[1960s: Export promotion, EPB, foreign exchange]
Export promotion policies(export import linkage, subsidies & policy loans, tariff reduction and exemption for imports of intermediate input for export)
EPB (economic planning board - in charge of planning, budgeting, statistical functioning) was established.
Earning foreign exchanges (increasing exports, sending labors such as miners and nurses to West Germany, normalizing diplomatic relationship with Japan in exchange for fundings)
[1970s: HCI, anti-inflation]
HCI promotion - heavy and chemical industries in steel, nonferrous metal, electronics, chemical, machinery (including automobile), and shipbuilding
There were two oil shocks in the 1970s, the increase in oil price created inflation and foreign exchange problems. Korea had to implement anti-inflation measures and gain foreign exchange by getting construction projects and sending workers to Middle-east.
[1980s: Structural reform policies, Trade liberalization from the mid-1980s, expansion of existing industries, democratic movements]
Korea engaged in economic restructure (labor, loans, industrial development, infrastructure) to face challenges of 3 Highs (High oil price, high or strong US dollar, high interest rate).
In the mid-1980s, Korea took advantages of 3 Lows (Low oil price, Low or weak US dollar and strong Japanese Yen, Low interest rate) to expand her industrial power and promote export (automobiles, electronics, shipbuilding, etc)
After the success of export increased, balance of payments improved from deficit to surplus. Korea had more reserves and positive current accounts. Savings (taxation) also increase and so Korea had more money to invest and upgrade her economy.
[1990s and beyond]
Successful diversification of industry paved the way for a diversification of exports into semiconductors, computers, automobiles, chemicals, and ships. Despite the 1997/98 financial crisis, Korea recovered very fast and strengthened her financial and banking management. Since then, they have moved into service, information technology, green and knowledge based economy.
The government support of big business has led to Chaebol model of export growth, research and development spendings. But small and medium size businesses have not benefitted from economic success.