I make a 'policy shift' when I hear the debate of right politics, constructive politics and sub-standard opposition. My original aim is to discuss about “Su Dongbo, Zhang Juzheng and Singapore education system”. The discussion will end with a sub-standard PAP, in particular from the assessment of the quality of PAP potential candidates.

Another policy shift is to discuss it like a play, a drama and make it more entertainment rather than a sub-standard political discussion.

Imagine a sense in the Hong Kong's gangster movie (or a godfather movie), the gangsters' master is shouting at his poor opponent and demand him to give a price for his wrong act. The poor guy without any resources can only offer his body or his service to work for the master.

From far away, you can see his shouting.

Now we turn to Chinese history. In Northern Song, Su Dongbo (苏东坡）is taking his imperial examination. The chief examiner is Ouyang Xiu（欧阳修）.  Ouyang Xiu likes Su Dongbo's work very much and decides to award the top award to him. However, after second thought he decides to award it to another candidate because Su's essay looks very much like one of his students. In order not let others criticize his favouritism, he awards some one not deserving to be the first. It, anyway, never stops Su Dongbo or Quyang Xiu to be the giants in Chinese literature. Su, after exam, still pays respect to Ouyang as his teacher, his mentor.

Few hundred years later, in Ming dynasty, a young talent, Zhang Juzheng (张居正）, was born. The Ming was in a period of infighting, dirty politics, and social unrest. It is financially bankrupted and in deficit. Everyone expects Zhang to come in first in provincial examination after his county exam. However, the chief examiner interviews Zhang and tells him the reason why he cannot be the top student. And in fact, Zhang fails the exam. The reason is that young talent like Zhang must learn failure before success. Zhang finally cleared the exam at an older age and becomes the prime minister. His reform in taxation and other social policies turn the fortune of Ming, from deficit to surplus in just 2 years and also he strengthens the defence. Historians comment that without Zhang, the Ming dynasty will fall earlier and Zhang gives Ming another 50 or 60 years to live.

Back in chamber again, a potential member from the ruling party is shouting high and low, cry father cry mother. What is he shouting? I deserve to be first. I cannot forgive my primary five teacher who awards some one not on meritocracy principle. The teacher said, 'you already had too many awards and let other has a chance'. The honourable member replied: 'this is not fair'. 'I am not Su Dongbo or Zhang Juzheng'. 'I want to be the first in examination or in my work based on merit'.

So, this is the kind of standard that the ruling party wants to present to the voters. Is this, a typical product of Singapore education system? The audience has to decide whether the ruling party is running out of candidates and has to present sub-standard candidates to fill up their candidate list. And so where are the high quality candidates? It cannot be a zero sum game. Every education system must produce some talents. Could they go to the opposite side?

From chamber, we move to society, to the economy. We look at the social media, the ruling party is doing poorly. We then look at the policy options, again, not convincing.

The conclusion is the PAP is putting up a sub-standard show in the chamber. And unfortunately, their potential candidates are also sub-standard if not in academic then in morality. They fail to learn success comes from failure. Meritocracy does not make you a great man, but morality does. 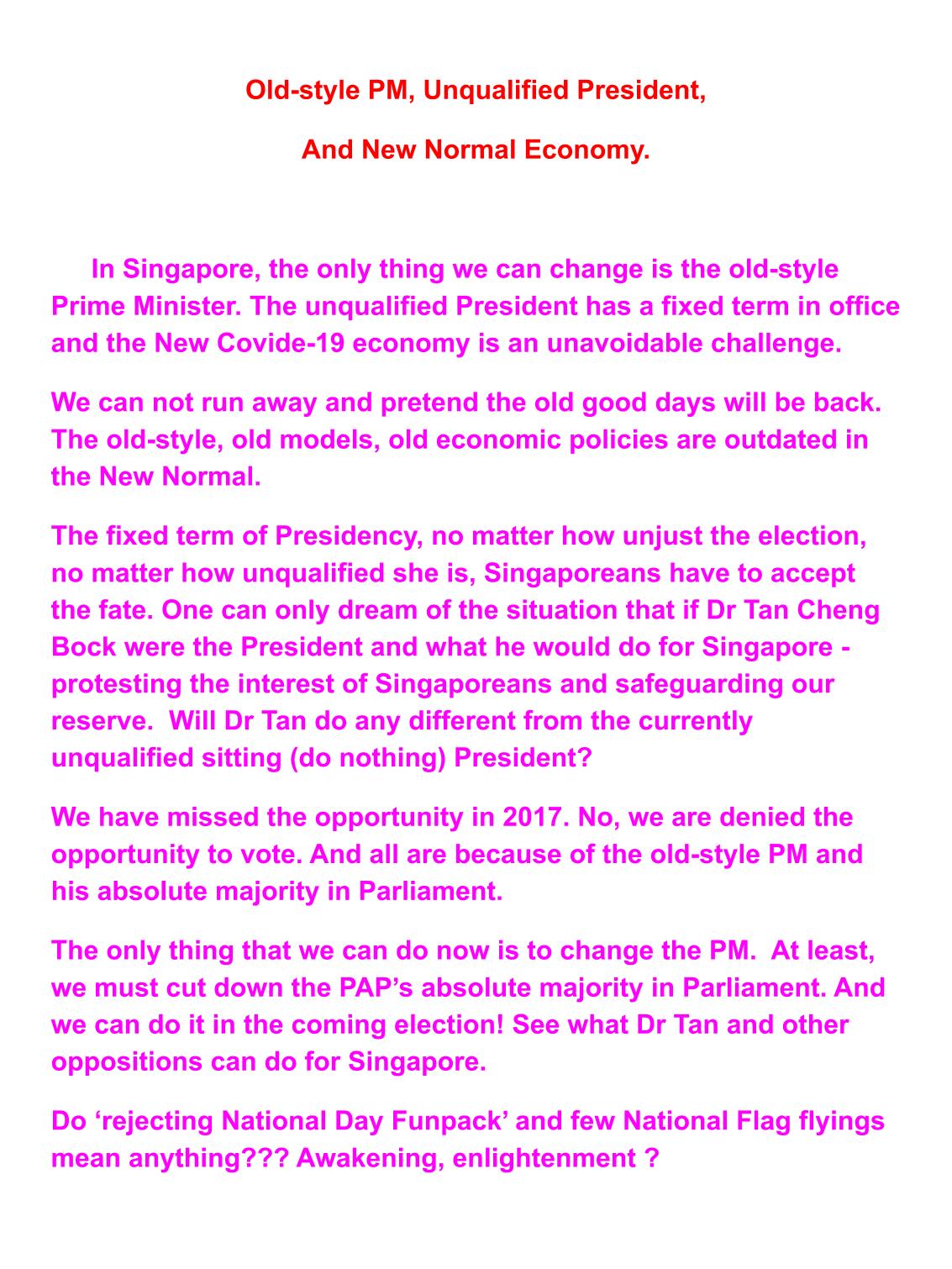